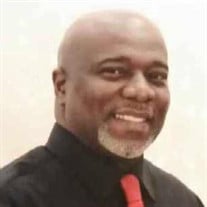 Albert Bernard Stewart, III, or "Stewart” as he was respectfully known by many, was appointed to Earth on August 17, 1967, in Jackson, Mississippi. God truly broke the mold when he designed such a genuine person. He was the first-born son to Albert B. Stewart, Jr. and Johnnie Ruth Stewart. Stewart accepted Christ at an early age but rededicated his life to God under the leadership of Elder Haywood Hannah at Greer Chapel United Methodist Church of Flowood, MS. Stewart was educated through Jackson Public Schools, where he graduated from Lanier High School and, thereafter, bravely joined the United States military. Ranking as a Specialist in the Army branch, he earned many distinctions such as an Overseas Service Ribbon; he served his country in Dessert Storm. Respectfully, Stewart also earned marksmanship badges as Expert (M-16 rifle) and Sharpshooter. Stewart concluded his time with an honorable discharge and followed with a passionate career at Mississippi State Hospital. Employed there for over 25 years, Stewart spent the latter years as an outstanding and loved supervisor. In his leisure time, Stewart enjoyed gatherings with family and friends. Known as a family man and committed husband, Stewart loved to travel with the love of his life, to cook and BBQ, be an active member of Greer UMC and serve where he felt lead, and support his family and friends in anyway; you could count on him to show up. Most of all, he was a dedicated Cowboys fan! Go Cowboys! Stewart was preceded in death by his mother, Johnnie Ruth Stewart; uncle, Jesse Stewart; and mother-in-law, Zella McIntyre. Stewart left to honor and cherish his memory: his loving, caring, and devoted wife of 29 years, Stephanie Annette Stewart; his two sons, Eric McIntyre and Joshua Stewart, and his only daughter Chelsa Stewart; his grandson, Johnathan Brown, Jr.; his father, Albert (Berdie) Stewart, Jr.; his siblings, Gail, Sandra, Milton, Deidra, Gary (Nicole), and Adrian Stewart all of Jackson, MS, and Pam Bender of Georgia; sisters-in-law, Cynthia (Darron) Kelly and Jasmine McIntyre; and brother-in-law, Eugene (Deloise) McIntyre, Jr. all of Pearl, MS; and a host of aunts, uncles, nieces, nephews, and other relatives; and close friends, James Nichols, Aubrey Watley, Walter Redd, and Terry Boddy.

Albert Bernard Stewart, III, or "Stewart&#8221; as he was respectfully known by many, was appointed to Earth on August 17, 1967, in Jackson, Mississippi. God truly broke the mold when he designed such a genuine person. He was the first-born... View Obituary & Service Information

The family of Mr. Albert Bernard Stewart III created this Life Tributes page to make it easy to share your memories.

Albert Bernard Stewart, III, or &quot;Stewart” as he was respectfully...

Send flowers to the Stewart family.