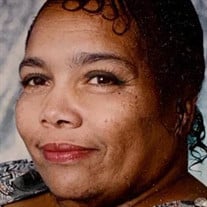 Mrs. Argertha Mangum-Scott Smith was one of twelve children born August 16, 1940 to the late Mr. Ted Mangum and Mrs. Girtrude Mangum in Rankin County, Pearl, Ms. She was preceded in death by four siblings; Billy Mangum, Wilroy Mangum, Eddie Mangum, and Ted Mangum, Jr. Living siblings are Clotea, Sammie-Lee, John Wayne, Charles, Mary Ann, Earl, and LeVertis. On October 4, 2019, God dispatched his angels on assignment at 5:56 p.m. to Jackson, Ms. in search of a laborer from his early gar den of paradise; of which Mrs. Argertha was his choice. Mrs. Argertha attended school in the Rankin County School District, Pearl; Ms. She met and was joined by God through marriage to the late Mr. Willie B. Scott in 1955. To this union were born seven beautiful children; Willie (Nancee), Doris, Betty (Robert), Inez (Joe), Arthur (Lisa), Annette, Jerry (Lola); which preceded her in death; a host of grands, great-grands, and great-great grands. On September 22, 1997, at the time of Mr. Willie B. Scott's death, Mrs. Argertha was united in holy matrimony to Mr. Larry Smith June 8 1999; which al so preceded her in death May 2016. She was employed at an early age at Mississippi State Hospital in the Dietary Depart ment. Along with her daily job, she also completed various projects and engagements of catering and preparing food for different occasions; of which her most famous dished were “bread pudding” and “turkey dressing". She accepted Jesus Christ as her personal Lord and Savior at an early age; of which at the time that her son was called by God to Pastor, she joined The House of Prayer Pentecostal Church in Flowood, Ms.; which is now The House of Prayer Church of God In Christ in Pearl, Ms. Over the course of her fruitful life, she served as a church moth er; and throughout the years served as president of the Mother Board. She was truly an extraordinary woman that loved Christ as well as her family. Because of the foun dation she laid, her family will have a lasting blue print on unfailing and faithful love, humility, joy, and peace.

The family of Ms. Argertha Smith created this Life Tributes page to make it easy to share your memories.

Mrs. Argertha Mangum-Scott Smith was one of twelve children born...