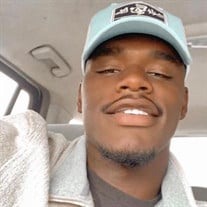 Mr. Averyon Kentriel Harris was born October 29, 1997 in Canton, Mississippi to Betty and Leroy Harris. He was proceeded in death by grandparents, Mary Jean and D.P. Ragsdale, as well as his grandfather, Leroy Harris, Sr. Averyon grew up in Sandhill, Mississippi and resided there until his sudden death. Averyon attended Pisgah Elementary and Pisgah High School where he graduated from in May of 2016. He went on to attend Southwest Community College where he played football for two years. After college, Averyon entered the work field where he landed multiple short term jobs before landing long time employment with Hollingsworth Lawn and Landscaping Service where he worked until his fatal accident. Averyon enjoyed all sports. He was a phenomenal athlete in every sport he played and enjoyed doing it. He received multiple awards as a kid for sports such as football, baseball, and basketball. His passion and talent for football lead him to Southwest Community College on an athletic scholarship. He leaves to cherish his memories: His devoted mother Betty Harris and his father and biggest motivator Leroy Harris, both of Sandhill, Mississippi; a handsome devoted son, whom he cherished dearly and meant everything to him; Cooper Isaiah Edwards Harris; a devoted grandmother, Ollie Mae Harris of Canton, Mis sissippi; four sisters, Cassandra Gore, who was also his biggest fan no matter the circumstances of Jackson, Mississippi; Manisa Ragsdale of Sandhill, Mississippi; Tricesha (Deon) Jones and Jessica Jones both of Canton, Mississippi; three brothers, Donnieke (Kenosha) Allen, Jamarcus Brookins and Ladarius Brookins. He also leaves to cherish his memories nine uncles, Charles Harris, Billy Ray Harris, Jason Harris, Alex (Cassandra) Shavers, Ricky McGruder, and James Harris all of Canton, Mississippi, James (Barbara) Ragsdale, Don Ragsdale, and David (Lillie) Ragsdale all of Sandhill, Mississippi; nine aunts Mary A. Lewis and Elaine Ragsdale, both of Sandhill, Mississippi,. Sharon Mapp, Karen Miller, and Patricia Davenport all of Fort Walton Beach, Florida, Linda Harris of Jackson, Mississippi, Lillian Harris, Johnny Ruth Harris, and Renee Harris all of Canton, Mississippi. Averyon had such a big family and he touched the hearts of so many. A family and community was torn by his loss, and life will never be the same. He also leaves great aunts, uncles, nieces, nephews, cousins, and an abundance of friends to cherish his loving memory.

Mr. Averyon Kentriel Harris was born October 29, 1997 in Canton, Mississippi to Betty and Leroy Harris. He was proceeded in death by grandparents, Mary Jean and D.P. Ragsdale, as well as his grandfather, Leroy Harris, Sr. Averyon grew up in... View Obituary & Service Information

The family of Mr. Avervon Kentriel Harris created this Life Tributes page to make it easy to share your memories.

Send flowers to the Harris family.