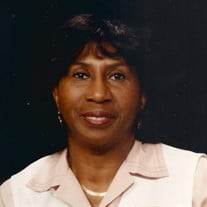 The life of Barbara J. Johnson Karasiewicz began in Braxton, MS, October 4, 1940 with her loving parents, Robert and Earl Lee Johnson. Barbara's formative years were spent in Braxton where she attended Rock Hill Elementary, New Hope High School and graduating from McLaurin High School in 1960. She joined Jerusalem M.B. Church as a young child and remained a member until she moved to Chicago, IL; later moving to Milwaukee, WI where she worked various jobs. Barbara joined Wisconsin Lutheran Church. As destiny would have it she met and married John Karasiewicz and together they raised one son, Reginald. She loved traveling, visiting the Caribbean Islands, Rome, Italy, Venice and several U.S. states. A career move caused them to relocate to IL for several years. Another move led them to Granger, IN where Barbara worked as a Pharmacy Technician at Walgreens. She joined Christ the King Lutheran Church and worked faithfully in several auxiliaries. Barbara loved helping anyone in need and often volunteered at a local nursing facility. Upon retirement, Barbara and John moved to Braxton, MS. For a short time, she worked at Walgreens and as a bus attendant in Rankin County School System. Once again she became a member of Jerusalem Church serving as an usher, attending Sunday School, Adult Bible Study and the WOMEN'S ministry. Lending a helping hand to anyone who needed it was her joy. She and Jessmue Johnson cooked food in her kitchen and distributed to the sick and shut-ins in the surrounding communities. When her health would no longer allow her to attend church services, she tuned in to the Sunday School Conference call and Sunday sermons on u-tube. When her eyesight started to fail, Jessmue Johnson read the scriptures and Daily Word to her everyday. She and Pearl Mims prayed together. Those were the two things she did not want to miss. Barbara's characteristics: faithful, loving, kind, helpful, quiet, trustworthy, a lover of the Lord, family and friends. Preceding her in death: parents, Robert and Earl Johnson, sister, Lillie Rose Hines, brothers: Robert Lee and Ray Johnson Barbara will be greatly missed by her loving husband, John, Braxton, MS. son, Reginald (Stacey) Houston, TX; sisters: Lillie Ruth Lucas, Ruby Dale Perkins, Janet Smith, Mae (Gregory) Lampley, brother Lawrence (Mae Catherine) Wilson, sister-in-law Mary Johnson, Milwaukee, WI, and one Aunt, Lemmie Shepherd, Braxton, MS.

The family of Mrs. Barbara Joe Karasiewicz created this Life Tributes page to make it easy to share your memories.

The life of Barbara J. Johnson Karasiewicz began in Braxton,...

Send flowers to the Karasiewicz family.