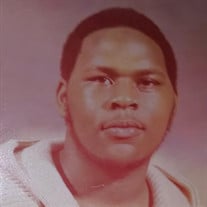 Billy Edward Lee was the tenth child of ten children, bom to the late Henry Mckinley Lee, Sr. and Willie Calloway Lee on April, 19, 1960 in Hinds county, Jackson, MS. He is preceded in death by his parents, 4 brothers: Willie Ray Lee, Henry McKinley Lee, Jr., William Lee and Joseph Lee. He departed this earthly life on January 10, 2022. He attended Morton Attendance Center and graduated in 1978. Billy was a standout athlete and wore his #75 football jersey proudly. Those who played the game with him nicknamed him "Stick". Following graduation, he attended Jackson State University. At an early age, he professed Christ and was baptized in his family's pond by the late Rev. Fred Chapman. One of his favorite gospel songs was, "You Just Don't Wanna Know", by Pastor Marvin Winans. He knew that laughter was good for the soul and enjoyed sharing a joke to make others laugh. He was a loving and devoted Father and son, always giving his all and showered love with his beaming smile. He is survived by his two children: Erica Lynette Stingley and Son-in-Law Tyrone of Walnut Grove, MS, Sade Dominique Evans and Son-in Law Alonzo of Forest, MS and a special Father to Amy Davis (Chrishona) and a host of grandchildren: La'Darrious, Sha'Niyah, Eriyonna, Michael, My Kay la, Ty'Asia, Jadarian, TyShaun, 5 siblings: Brothers; Robert Lee (Barbara), David Lee (Clotee), and Samuel Lee, sisters; Joann Loper, Carolyn Simpkins and Martha Goode, a host of nieces, nephews, other relatives and friends and a very dear and loyal friend, Anthony Boyd.

The family of Mr. Billy Edward Lee created this Life Tributes page to make it easy to share your memories.

Billy Edward Lee was the tenth child of ten children, bom to...

Send flowers to the Lee family.