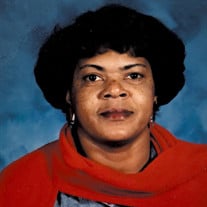 Bobbie Nell Evans Jenkins, was born on July 8, 1948, to Charles Evans and Beatrice Gardner Evans in Sandhill, MS. She was born next to last of fourteen children in the family. Bobbie, like all her siblings before, joined Mt. Pisgah Baptist Church, where she learned the basic tenants of the Christian faith. She attended Rankin County Public School System. She was double promoted very early in her education and excelled beyond her peers. Bobbie continued performing at an accelerated rate throughout middle and high school. After finishing high school, she attended Rust College, in Holly Springs, MS, and then she transferred to Jackson State University. While attending Jackson State she earned a bachelor's and master's degree in Exceptional Education with honors. Bobbie met and married Leonard Jenkins and into that union two children were born. This young family immediately joined the New Hope Baptist Church in Jackson, MS, where both of their children were baptized and brought up in the church. Bobbie was very active in the church. She was a member of the choir, volunteer with the Children's Ministry and the Women's Mission. While being very active in the church she was also a dedicated teacher in the Canton, Clinton, and Jackson Public School systems. Bobbie pursued teaching for several years before embarking on a new career. She enrolled in the Nursing Program at Hinds Community College and became a registered nurse. The nursing community was blessed to have Bobbie working for many years until her emotional health began to impact her personal life. She was always a very smart, talented, creative, passionate, and hard-working woman. Recognition of her hard work and service resulted in several awards and commendations. She was a fervent believer in God. One of her favorite verses was Isiah 54:17. “No formed against you weapon I prosper and every tongue which rises against you in judgement, you shall shall condemn." This is the heritage of servants of the Lord and their righteous is from me Says the Lord. Bobbie was s proceeded in death by both of her parents Charles and Beatrice Evans and seven siblings: Dorene Peaches, Carol Childress, Alice Mack, L.C. Evans, George Ford, Wille Evans, and Leona Dilworth. She leaves to cherish a son Adrian Jenkins (Octavia), Dallas, TX, daughter, Jennifer Jenkins, of Dallas, TX; five grandchildren: Bradley Mannarie, Tevin Jenkins, Natalia Brown, Keaton Jenkins, and Braylon Jenkins. Five devoted sisters: Lillian Stewart (Elex), Lillie Johnson of Goshen Springs, MS; Nettie Reid of Sandhill, MS; Etta Smith (Jimmy) of Madison, MS; Doris Hinton (Bob) of Decatur, GA, and one brother: Charles Evans Jr. of Sandhill, MS; and a host of nieces, nephews, cousins, and friends.

Bobbie Nell Evans Jenkins, was born on July 8, 1948, to Charles Evans and Beatrice Gardner Evans in Sandhill, MS. She was born next to last of fourteen children in the family. Bobbie, like all her siblings before, joined Mt. Pisgah Baptist Church,... View Obituary & Service Information

The family of Mrs. Bobbie Nell Jenkins created this Life Tributes page to make it easy to share your memories.

Send flowers to the Jenkins family.