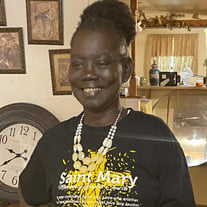 Many daughters have done virtuously, but thou excellest them all. Proverbs 31:29 A virtuous woman, faithful servant, God fearing woman, extraordinaire mother, sister, neighbor, and friend, she was indeed a woman of distinction. A Queen, Bridgette Kaye Gipson is an example of such an individual, a woman of essence and elegance, a woman of distinction. On March 01, 1965, Bridgette Kaye Jones Gipson was born to Leon Douglas Jones, Sr. and Mary Bell Jones in Hinds County. At an early age she accepted Christ. She was a member of St. Mary Missionary Baptist Church where she worked with the youth in all capacities. She especially love attending the Sunday School Institute. She had strong relationship with God. When life seem unbearable, she would always pray. As her health began to fail, she never let her faith suffer. Her faith grew greater as she prayed constantly. She thoroughly enjoyed being around family and friends, and those gathering food and fellowship. On Thursday, May 13,2021 at 9:46 p.m. God assembled a heavenly host of Angels to greet Bridgette as she received her final and most precious honor, her crown of glory. Bridgette is proceeded in death by her parents, brother, Michael A. Jones and sister, Rose Marie Alexander. She leaves to cherish her memory, her husband Tommy whom she called "Honey"; her loving children Tommy Gipson, Jr (Shannon), Tommika LaKaye Gipson Redd (Robert) of Brandon, MS, and Leon Roosevelt Gipson (Danielle) of Jackson, MS; one granddaughter, Tommia Latrice Gipson; one godson Juan Jenkins; a special father-in law, Roosevelt Gipson; and two earthly mothers, Dorothy Jean Wilder and Maxine Jones. She also leave to cherish memories her beloved siblings; Leon Douglas Jones, Steven C. Jones, Vincent Jones, Christopher Shavers, Tonya Shavers all of Jackson, MS, Ivan Jones of Illinois, Betty Jean Burton (Karl) of DeLo, MS, and Leontyne Jones of Sharon, MS; and three special cousins, Sandy Leonard, Renee Mangum and Sharon Smith. Bridgette also left her cherished memories to her personal driver, Bobby Joe McIntyre, and Shornita Shavers (James), a friend who was her accountant, sister -in-law, personal driver or whatever the cause may be. She wore many hats and helped with so much. She leaves aunts, uncles, and a host of relatives and friends. Special Thanks to April Nolen from Grace and Mercy Personal Care.

Many daughters have done virtuously, but thou excellest them all. Proverbs 31:29 A virtuous woman, faithful servant, God fearing woman, extraordinaire mother, sister, neighbor, and friend, she was indeed a woman of distinction. A Queen, Bridgette... View Obituary & Service Information

The family of Mrs. Bridgette K. Gipson created this Life Tributes page to make it easy to share your memories.

Many daughters have done virtuously, but thou excellest them...

Send flowers to the Gipson family.