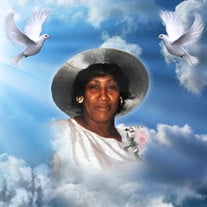 Mrs. Bernice Johnson-McGee, a.k.a. “Cousin Bonnie”, was born on June 1, 1940 in Lexington, MS to the late Mr. Joe Nathan Johnson, Sr. and Ms. Olivia Hodges. She was the 2nd child of nine children. Bernice gave her life to Jesus Christ and was baptized at an early age. She loved unconditionally her children, grandchildren and her community. Bernice was educated at the Lebanon School and later in life made a home that was known as a place of comfort and peace as she selflessly opened her arms and doors to many. She enjoyed going to church, doing creative arts and crafts, shopping, cooking, and keeping a house that would become a living museum of life events. She captured all special moments by hanging pictures on her walls that showed how much she cared about family, EVERYONE was family. As the sun rose on Bernice Saturday, June 1, 1940, it set on her Sunday, December 15, 2019 at 11:30am. Although she has departed from this life, her memories are carried on through all the live she touched. As she would say “Praise the Lord.” She was united in holy matrimony to Jessie Lee McGee, Sr. on February 25, 1957. To their union, eight children were born. Mr. McGee preceded her in death on October 23, 2017. Bernice was also preceded in death by her parents, Joe Nathan Johnson, Sr. and Olivia Hodges; stepmother, Lillian H. Johnson; brother, Joe Nathan Johnson, Jr.; sisters, Lillie Mae Johnson and Carrie Mae Johnson-Walden. She is survived by three (3) sons, Jessie Lee McGee, Jr. (Linda) of Chicago, IL, King McGee (Ella), Dale McGee (Barbara) both of Jackson, MS; five (5) daughters, Shirley Ann Greer (Paul) of Jackson, MS, Mary Ann Ambrose (Michael) of Chicago, IL, Bonnie Jean Wiley (Dale) of Lexington, MS, Lenora Dixon (Sinostic), Earnestine McGee both of Jackson, MS; five (5) sisters, Beatrice Gilliam of West, MS, Luerine Johnson of Chicago, IL, Tina Johnson-Smith of Memphis, TN, Lucille (Lenoria) Meeky of Lexington, MS, Marilyn Epps of Greenwood, MS, seven (7) sisters-in-law, three (3) brothers-in-law, twenty three (23) grandchildren, thirty six (36) great grandchildren and many beloved nieces, nephews, cousins and friends.

The family of Ms. Burnest McGee created this Life Tributes page to make it easy to share your memories.

Send flowers to the McGee family.