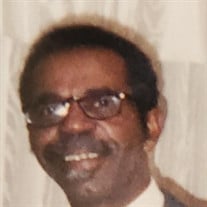 On Friday, July 12, 2019, Charles Ray McCullum, loving husband and father of three children, passed away at the age of 70. Charles was born on January 24, 1949 in Taylorsville, MS to Jayfus and Mildred (Blackwell) McCullum. He lived in the Raleigh area throughout his life, was active in church at an early age, graduated from Turner Chapel High School in 1969, served his country during the Vietnam War (honorably discharged in 1975) and successfully worked in the carpentry field throughout the southern United States for over 50 years. On October 17, 1971, he married the love of his life, Shirley Ann Norwood. They successfully raised two sons, Charcelor and Trevor, and one daughter, Kimeisha. He was also blessed with one grandson, Hunter. Charles will be fondly remembered by his family and friends for his love for his family, his love for his community, his quick wit, his service to his country and his unmatchable skill, vision, ability to build and repair anything that was placed in front of him. Charles was preceded in death by his father (Jayfus), his mother (Mildred), his brother (JT), and his sister (Annie Pearl). He is survived by his wife, Shirley; his three children, Kimeisha, Charcelor, and Trevor; his grandson, Hunter; his brothers, Jayfus (Lena), Isaiah (Lorene); his sisters, Annie Ruth, Linda, and Vera (Barney); and special family members Joe (Bea), and Hazel; four sister-in-laws, Betty, Brenda (Kenneth), Mary and Margaret and three brother-in-laws, William (Rose), Otis (Mavis) and Mitchell (Teretha). He is also survived by a host of nieces, nephews, cousins, extended family members, and close friends.

On Friday, July 12, 2019, Charles Ray McCullum, loving husband and father of three children, passed away at the age of 70. Charles was born on January 24, 1949 in Taylorsville, MS to Jayfus and Mildred (Blackwell) McCullum. He lived in the... View Obituary & Service Information

The family of Mr. Charles Ray McCullum created this Life Tributes page to make it easy to share your memories.

Send flowers to the McCullum family.