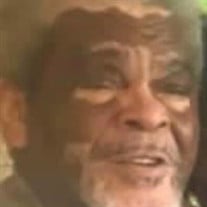 Let not your heart be troubled: Ye believe in God, believe also in me. John 14:1 The course of life began for Clift (as he was called by his wife) on March 3, 1952 in Hinds County. The final chapter ended on Wednesday, April 20, 2022. Mr.... View Obituary & Service Information

The family of Mr. Clifton Calender III created this Life Tributes page to make it easy to share your memories.

Let not your heart be troubled: Ye believe in God, believe also...

Send flowers to the Calender family.