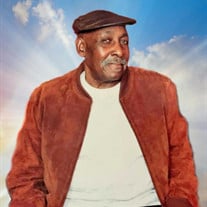 Cubie "Jimmy" Robinson was blessed with the gift of life on July 13, 1930, in Mileston, Mississippi to the late Elder James Robinson and Lady Beulah Robinson. He was the 5th of fourteen children. He moved to West Palm Beach, Florida where he met and married Betty Jean Northern. In the early 70's they relocated to Jackson, Mississippi where they settled and raised their family. Jimmy worked with his father as a landscaper and eventually built a successful painting and landscaping business of his own. In addition to his impeccable people skills, he was just in his dealings and exemplary in his deportment. Jimmy's business included an impressive list of repeat clienteles which allowed him to pro vide for his family in addition to employing and mentoring other young men. Jimmy was faithful to his wife and family and loved them wholeheartedly. Most everyone knew of his passion for cooking, gardening, hunting and fishing. His secret recipe barbeque sauce was sought after every summer. His humor was sprinkled with wisdom and his hugs were genuine. He was preceded in death by his eldest son Cubie Lee Robinson and leaves to cherish his memory his loving wife of over 53 years Betty Jean Robinson; five children: Kathy (Cleo) Boderick of Temple Terrace, Flori da, dan McDuffie of West Palm Beach, Florida, Tony (Vivian) McDuffie of Dickinson, Texas, Tonya McDuffie and Shandra Robinson both of Jackson, Mississippi; seven grandchildren: Ashley (Keith) Jenkins of Seffner, Florida, Shawn (Danielle) McDuffie of Gibsonton, Florida, Jasmine (Ignis) Avis of Houston, Texas, Ben (Christina) Williams III and April Williams both of Jackson, Mississippi, Crystal McDuffie of Dickin son, Texas, and Maurion Boderick of Brandon, Florida; seven great grand children: Kyngston, Jordan, Aliyah, Braylen, Mya, Idrius and Bailey; two brothers: Samuel and Jesse Robinson both of Jackson, Mississippi; two sisters: Flossie Mae Robinson and Priscilla Ross both of Chicago, Illinois; two brother in laws: David Lee (Joannie) Northern of Tampa, Florida, Willie James (Nicie) Northern of Lansing, Michigan and one sister in law: Barbara Northern of Riviera Beach, Florida and a host of nieces, nephews and friends.

Cubie "Jimmy" Robinson was blessed with the gift of life on July 13, 1930, in Mileston, Mississippi to the late Elder James Robinson and Lady Beulah Robinson. He was the 5th of fourteen children. He moved to West Palm Beach, Florida where he... View Obituary & Service Information

The family of Mr. Cubie Robinson created this Life Tributes page to make it easy to share your memories.

Cubie &quot;Jimmy&quot; Robinson was blessed with the gift of life on July...

Send flowers to the Robinson family.