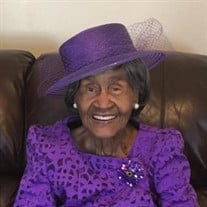 On January 4, 2021, Mother Curitisscene Johnson Lonie entered into eternal life. The first child born to the late Tommie Johnson and Mary Garner Johnson on October 17, 1929 in Rankin County Mississippi. Curitisscene was preceded in death by her husband John Lonie; and children, Marilyn Lonie Briscoe, Ora Belle Lonie McDaniel and Kenneth Paul Lonie. A son in law Richard Craig Taylor. Three grandchildren, one sister and two brothers also preceded her in death. She received her education at Sweet Rest School Pearl, MS and Buchanan, Michigan Public Schools. She was united in holy matrimony to the late John H. Lonie, February 9, 1948 and to this union nine children were born. Curitisscene joined Sweet Rest Church of Christ Holiness, USA at an early age, under the pastorage of Reverend H.R. McInnis. She served in the choir ministry. She would later move her membership to be with her husband at Mt. Elam M.B. Church, under the pastorage of Rev. R.L.T. Smith. She continued to serve under the leadership of the following pastors: Rev. T.C. James, Dr. Jesse Horton, Sr. and Rev. A.D. Lewis. She was a faithful member of the Senior Choir, Vocal Choir, Deaconess, and the Missionary Society. In 2009 she reunited with the Sweet Rest Church of Christ Holiness, USA, under the pastorage of Elder Joseph Pridgen, where she continued as a member of the Senior Choir and was a faithful member of Sunday School She began her career in the Restaurant Industry. Next as a Housekeeper. Upon retiring she served as a Foster Grandparent at GG's Christian Academy, as an assistant to Pam McCornell. She continued with the foster grandparent program with her daughter, Nancy Lonie-Taylor Director of the Mt. Elam Preparatory School from 2004 until 2007. She loved and adored all of her students. She leaves to cherish her legacy two daughters: Gazelle (Noble) Carson, Nancy Lonie-Taylor, four sons John Henry (Emma) Lonie, Darrell Ray (Hazel) Lonie, Rev. Jerry (Joyce) Lonie, Rev. Dan (Tere sa) Lonic and a special grandson that she raised Arthur Lee (Cynthia) Mc Daniel, Jr.; 17 grandchil dren, 22 great grandchildren and 5 great great grandchildren; she also leaves three sisters: Wille Mae Stevenson, Berlean Roper, and Mary Jane (Birtnell) Denson. A host of nieces, nephews and many friends.

The family of Mrs. Curitisscene Johnson Lonie created this Life Tributes page to make it easy to share your memories.

Send flowers to the Lonie family.