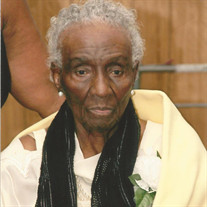 Mrs. Daisy L. Slaughter Watson was the third of twelve children born to proud parents, Mr. Asa and Mrs. Bertha Pierce Slaughter, Senior on July 23, 1923, in Canton, Mississippi. Daisy received her education from the area schools in the community and graduated from Cameron Street High School in 1940. Affectionately called by her siblings as "Sister," Daisy, the eldest daughter in the family, would have to assume the role as mother at the untimely death of their mother. As time elapsed, the Slaughter children were blessed to have a stepmother, Mrs. Mary Whitehead Slaughter, who loved them as her own and taught Daisy and the other children how to manage and take care of the home. Having been taught, nurtured, and brought up in the admonition of God, by her father, Daisy realized that she could not make it on her own, but that she must surrender to a higher being. Therefore, she confessed Christ as her personal Savior and was baptized at Mount Able Missionary Baptist Church, the family church, in Canton. She later united with Mount Pleasant United Methodist Church in Pelahatchie, where she served faithfully as church secretary for more than 50 years. Daisy met and married Mr. Rufus Watson, Senior and to this great union were born three sons: Rufus, Junior, Bernard, and McKinley. In addition to working alongside her husband in the business of farming - growing crops and raising livestock - Mrs. Watson was employed by the Jackson Packing Company and Mississippi State Hospital. On August 18, at 11:30 A.M., God dispatched one of his angels to visit Daisy at the Brandon Nursing & Rehab Center to inform her that her room in the mansion that He'd prepared for her was now ready. Without hesitation, she accepted the invitation to reunite with all those - husband Rufus, Sr., sons (Bernard & McKinley), parents (Asa & Bertha Slaughter, Mary Slaughter), and siblings, (James, Calvin, Theodore, Malcolm, Julius, and Asa, Jr.) – who had gone on before. Her fond and loving memories will forever be cherished by her loyal and supportive son, Mr. Rufus (Flossie) Watson, Jr. of Pelahatchie, MS; daughters-in-law, Mrs. Mary Watson of Chicago, IL and Mrs. Brenda Watson of Brandon, MS; sisters, Mrs. Gracie Greene and Mrs. Ella Powell of Canton, MS; brothers, Mr. James (Barbara) Slaughter of Madison, MS, Mr. Jimmy (Aridell) Slaughter of Country Club Hills, IL, Mr. Lanny (Lillian) Slaughter of Canton, MS; eight grandchildren; seventeen great grandchildren; three great great grandchildren; special neighbors, Mr. & Mrs. Joseph Tate of Pelahatchie, MS; a high school classmate, Mrs. Matilda Chaffee of Canton, MS, an array of nieces, nephews, cousins, and friends.

The family of Mrs. Daisy L. Watson created this Life Tributes page to make it easy to share your memories.

Send flowers to the Watson family.