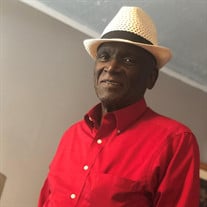 A beautiful, brown baby boy was born to Lula Jenkins Garner and George Garner on July 15, 1935 in Pearl, Mississippi. His name was David. David was part of a large, loving family and the fourth child of nine siblings. Family knew him as "Bee", a nickname given to him by his sister Everlena because she said he was sweet like bee honey. David's parents preceded him in death. Three brothers: George, John and Thomas and two sisters: Everlena and Lela, also preceded him in death. David met and married his first wife, Lurine Terrell Garner July 3, 1954. Seeking a better life for his family, David moved his wife and son, Dennis to Chicago, Illinois in 1956. David and Lurine added to their family a son, Eltorie and a daughter, Lavette. David was blessed with six grandchildren and four great-grandchildren whom he loved dearly. Especially dear to David was his granddaughter Porshé, who he helped raise Ddren Lurine were united in love for 55 years. Purine and Eltorie preceded him in death. David returned ro Pos MS in 2011. In 2013, he met Amanda Oliver and the two united as one on December 28, 2014 Da an, Amanda traveled together to visit family. Amanda was also David's caretaker during his illness. While in Chicago, David met and developed friendships with many, but there were two families that he would go on to love as though they were his own: The Powell and Stewart families. David worked in construction most of his life. In 1990, he retired from Hook's Concrete and Construction as a finisher. Later he started his own landscaping business. He was often complimented for having the best manicured lawn on the street and if you knew better, you would not walk across it. David loved the Lord! He was nurtured in a Christian home and accepted Christ at an early age. While in Chicago, he united with Christ Temple Church of Christ Holiness (USA) under the leadership of Elder Ware. He later served under the leadership of Bishop Henderson Hill of True Vine of Holiness Missionary Baptist Church. In 2011, David returned to Pearl, Mississippi, where he united with Pleasant Grove Missionary Bap tist Church under the leadership of Reverend Eric Brown. There he served under the Pastor Bobby D. Carter as a Trustee and faithful member until his health failed. David was an avid sportsman. He enjoyed horse racing, fishing, baseball, hunting and football. David was not a perfect man, nor was he expected to be. However, he managed to do his best to produce good fruits in this life and the lives of his loved ones. As much as we loved David, we know God loved him most and on March 26, 2021, God in his infinite love, mercy and wisdom said well done my good and faithful servant and called David home. David leaves to celebrate his memory his devoted wife, Amanda; 2 children, Dennis Garner, Sr. of Pearl, MS and Lavette (Kevin) Fargo of Flossmoor, IL; 7 grandchildren, Dennis, Jr, Darian, Porshé, Kiera, DeVonte, Kennedy and Kalel; 4 great grandchildren, DeAnthony, Jayda, Dante and Kori; 3 sisters, Rosie Proctor, Lula (Dan) Williams and Ada (General) Clark; 3 sisters-in-law; 3 brothers-in-law; adopted families, The Powell and Bobbie (Tommie) Stewart families; and a host of nieces, nephews, cousins and friends.

A beautiful, brown baby boy was born to Lula Jenkins Garner and George Garner on July 15, 1935 in Pearl, Mississippi. His name was David. David was part of a large, loving family and the fourth child of nine siblings. Family knew him as "Bee",... View Obituary & Service Information

The family of Mr. David Garner created this Life Tributes page to make it easy to share your memories.

A beautiful, brown baby boy was born to Lula Jenkins Garner and...

Send flowers to the Garner family.