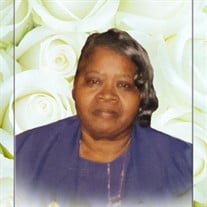 Mrs. Delores (Lady) Taylor was born August 6, 1932 in Fannin, MS to the Late Arthur and Florence Adams. She departed this life on Saturday, January 1, 2020 at St. Dominic Hospital. She was preceded in death by her husband, Charles Augustus Taylor;... View Obituary & Service Information

The family of Ms. Delores Taylor created this Life Tributes page to make it easy to share your memories.