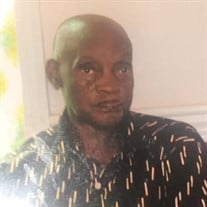 Bro. Devant Kelly, Sr. was born on June 18, 1947 to the union of Bernard Kelly and the late Angeline Proyer. He made his heavenly transition on January 18, 2021 at 3:00 a.m. Devant attended Summer Hills in Clinton, MS. He was united in holy... View Obituary & Service Information

The family of Mr. Devant Kelly Sr. created this Life Tributes page to make it easy to share your memories.

Send flowers to the Kelly family.