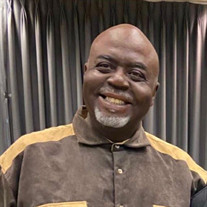 Dewey Trence Williams was born January 23, 1966 at Baptist Medical Center in Jackson, MS to the late Mr. Ezekiel Williams, Jr and Mrs. Sybil Williams. He was the second of five children. At an early age, he baptized at New Strangers' Home MB Church in Jackson, MS. At the age of four, he preached the word of accepted Christ as his savior and was God to the elderly in the community. He later joined Greater New Tru- light MB Church in Brandon, MS. Dewey demonstrated a strong passion for music. DJ "Count Chillout" was created from his love of music. He also loved to dance, which later led to the creation of Planet Patrol (Pop Locking Dance Group). Planet Patrol competed in school talent shows & performed in the community. He did not view each individual of Planet Patrol as a member, but as a Brother. Dewey graduated from Northwest Rankin Attendance Center in Flowood, MS in 1984. He furthered his education at Southern Technical College where he received a degree in Computer Technology. His education did not stop there, he attended United Theological Seminary under the guidance of Dr. Charles Stanley where he received a Bachelor's Degree in Theology. He was Ordained a Minister in order to proclaim the Gospel of Jesus Christ on June 29, 2014 at Greater New Truelight MB Church. Dewey has served for over 15 years as lead administrator for Rebuilding the Walls Deliverance Ministry. He was also an Insurance Agent with Benefits Consultants Insurance Agency in Springfield, MO. Dewey was a wonderful teacher, preacher, and mentor. In his spare time he enjoyed volunteering with youth sports and training players for their high school careers. He was a dedicated fan of the Dallas Cowboys and Alabama Crimson Tide. Dewey fulfilled the plan that God had for him on Thursday, March 25. 2021 in Brandon, MS. Words cannot express how much he will be missed by all the lives he touched. His family has lost a loving, entertaining, and charismatic family member that will live in their hearts forever. Dewey was proceeded in death by his father, Ezekiel Williams, Jr; brother, Everett Arnold Williams; sister, Grace Lisette Williams; and wife, Velma Williams. Dewey leaves to cherish his legacy and genuine love: his loving mother, Mrs. Sybil Williams of Brandon, MS; brother, Felix (Kirsten) Williams of Jackson, MS; sister, Telonna Williams of Pearl, MS. Five Children: Terrance Johnson of Norman, OK; Quinton Williams of Brandon, MS; Angel Williams of Clinton, MS; Marco Michell Jr and Kayla Williams of Brandon, MS. Three Grandchildren: Kaitin Bennet of Jackson, MS; Blessing Thurman of Florence, MS; Aylana Thurman of Florence. MS. Two Very Close Friends: Tim Piatchek of Springfield, MO and Melinda Johnson of Vicksburg, MS. A host of nieces, nephews, relatives, and friends.

Dewey Trence Williams was born January 23, 1966 at Baptist Medical Center in Jackson, MS to the late Mr. Ezekiel Williams, Jr and Mrs. Sybil Williams. He was the second of five children. At an early age, he baptized at New Strangers' Home MB... View Obituary & Service Information

The family of Mr. Dewey Trence Williams created this Life Tributes page to make it easy to share your memories.

Send flowers to the Williams family.