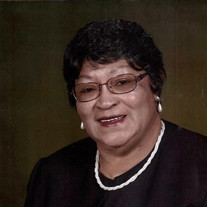 Ms. Doris Norwood Lewis, daughter of Samuel Norwood, Sr. and Ethel Lee Lewis Norwood was born May 3, 1941 in Florence, Mississippi in Rankin County. The Lord called Doris home on September 6, 2019. She was preceded in death by her parents, two sisters Loraine Foster and Betty Spence, and brother Samuel Norwood Jr. Early in life, Doris confessed Christ and joined Brown Hill Missionary Baptist Church. After marrying Andrew (T-Boy) Lewis, she moved her membership to Spring Hill Missionary Baptist Church in Florence Mississippi where she served faithfully. Doris was a member of the Gospel Choir and Missionary Society and served as Sunday School Teacher. In 2010, she became a member of the Metro Prayer Warriors Ministry Doris was a natural caregiver. For 19 years, she worked as a pulmonary therapist at the University of Mississippi Medical Center. She worked at The Orchard Retirement Community until her health failed. Doris loved her family and did what she could to help anyone. She enjoyed hosting family meals especially during the holidays. Her lightly glazed pound cake was a family favorite. She took delight in spending time with her family. Her weekly routine was to have breakfast on Saturday mornings and Sunday dinner with Tony. She would iron his dress shirts and Pittsburgh Steelers t-shirts leaving a fine crease in them. As he carried his pressed shirts out the door, she would call after him, "watch the merchandise". Grandkids and great-grandkids were her heart. She gave them whatever she could, whether or not they needed it. For the last 13 years, she waited on the great-grandkids to get home off the bus from school. If she was not home, she made sure someone was there to get them. She leaves to cherish her memories a devoted son, Tony A. Norwood (Arnita) of Byram, MS; three grand children Anthony T. Norwood, DeAnna C. Norwood and Alexandria E. S. Thompson; and four great grand children Devin A. Norwood, Arianna M. Norwood, Amauri A. Norwood and Carter A. Norwood. She also leaves two sisters, Earnestine Norwood of Chicago, IL and Carolyn L. Brunson (Robert) of Jackson, MS; a special family member Queen E. Norwood and a host of nieces, nephews, other relatives and friends.

Ms. Doris Norwood Lewis, daughter of Samuel Norwood, Sr. and Ethel Lee Lewis Norwood was born May 3, 1941 in Florence, Mississippi in Rankin County. The Lord called Doris home on September 6, 2019. She was preceded in death by her parents, two... View Obituary & Service Information

The family of Ms. Doris Norwood Lewis created this Life Tributes page to make it easy to share your memories.

Send flowers to the Lewis family.