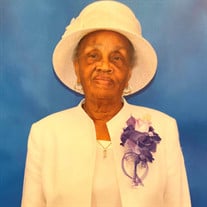 Doris was a feisty woman with a heart of gold known by many as "Doc". Doris was born on April 16, 1931, in Florence, Mississippi. She was the fourth child born from the union of Master McLin, Sr., and Gussie Kitchens McLin. Doris began her education at Steep Bank School in Florence, Mississippi, and attended Booker T. Washington in New Orleans after moving there at age sixteen. While working at the potato chip factory in the late 40's, Doris met and married Fred Douglas Webb Sr. To this union, five children were born. Doris worked various jobs until her most notable career at Holiday Inn as Executive Housekeeper. She was dedicated and thorough in her profession. She returned a large sum of cash that was recovered in one of the hotel rooms, circa 1978. Her act of honesty inspired Mayor Morial to grant her with the Key to the City. After twenty years, she retired and moved back to Florence, MS. Prior to returning to Florence, Doris obeyed the Gospel in 1982 at the Church of Christ (Elysian Fields Ave., New Orleans, LA) under the leadership of Brother Charles Toney. Her home congregation became the Church of Christ on Hanging Moss Rd. (Jackson, MS) under the leadership of Evangelist Curtis W. Pittman. Remaining in her executive role, Doris thoroughly enjoyed attempting to run her children's households. She enjoyed cooking Sunday dinners and made sure she had lagniappe to share with whomever may stop by after church. This tradition began in New Orleans, and continued after she returned to Florence. She was quick-witted and always had a comical rebuttal to offer. She would say such things as “I saw you when you first drove up", "You gotta be thinkin' while they talkin'", and "I've forgotten more than you'll ever know*- just to remind you that she stayed on her toes. Some of her other sayings were: "Don't pay me no cockeyed mind; I do this all the crosseyed time”, "A sleeping head don't know what a woke butt is doin", "You can get tall as that tree, and you'll never be as tall as me", "Where you goin, I've already been", "See a fool, leave a fool- don't stay there and be a fool". Doris was preceded in death by: her husband, Fred Douglas Webb, Sr., stepson Paul Webb; two grandchildren, Ebony Hervey and Shaun Bullie, her parents, Master, Sr. and Gussie McLin ; three brothers, Master McLin, Jr., Walter McLin, and Arthur McLin, Sr; two sisters, Cleo McLin Ideall, and Melvin Lorraine McLin Cain; two brother in laws, Clifford Ideall, Sr., and Charles Haygood, two sister in laws, Lillie McLin and Bernadine McLin. Her memory will be cherished by her loving children, Cynthia (Lionel) Francois, Gussie (Cleveland) Turner, Pamela (Wayne) Hervey, Fred Douglas Webb, Jr and Tracy (Glenn) Madison. Two brothers, Wesley (Earnestine)McLin Sr. and Sylvester (Dorothy) McLin; three sisters, Connie Haggood, Delois (John) Hoard and Rosetta (Levertis) Braddy; Nine grandchildren, Darian Webb Gordon, Dwight (Tiffany) Calhoun, Jarmon (Andrec') Webb, Raquel Webb, Ashley (Greg) Fassit. Mahogany (Orlando) Bogan, Misty (Ronnie) Ealey, Davon Webb, Whitney (Xavier) Montgomery, twenty-one great-grandchildren; one aunt, Bobbie Allison and one uncle, Shelton Allison, and a host of nieces and nephews, cousins, and friends.

Doris was a feisty woman with a heart of gold known by many as "Doc". Doris was born on April 16, 1931, in Florence, Mississippi. She was the fourth child born from the union of Master McLin, Sr., and Gussie Kitchens McLin. Doris began her... View Obituary & Service Information

The family of Mrs Doris L. Webb created this Life Tributes page to make it easy to share your memories.

Doris was a feisty woman with a heart of gold known by many as...

Send flowers to the Webb family.