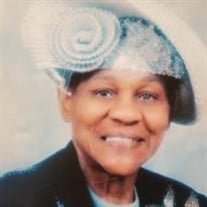 Dorothy Louise Branch Cannon was an original. A way-having, hat-wearing storm of a woman, she had a huge personality, generous spirit and appetite to serve. Her impact and influence was felt throughout her native Rankin County and the entire... View Obituary & Service Information

The family of Mrs. Dorothy Louise Cannon created this Life Tributes page to make it easy to share your memories.

Dorothy Louise Branch Cannon was an original. A way-having, hat-wearing...

Send flowers to the Cannon family.