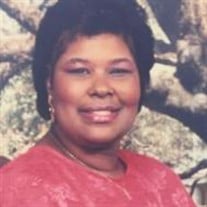 Dorothy Eyonne Kelly-Jones was born on August 23, 1947, in Jackson, Mississippi. Her parents were Clarence Kelly and Dorothy L. Phillips. Dorothy was united in holy matrimony to Cleveland Jones on October 5, 1969. at the home of her mother-in-law,... View Obituary & Service Information

The family of Mrs. Dorothy Jones created this Life Tributes page to make it easy to share your memories.