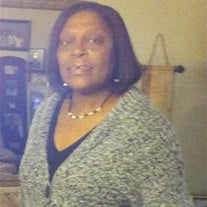 Sis. Dorothy Faye Bell-Morris was born the youngest of 12 siblings in Benton, MS on March 31, 1955 to the late Mr. Henry and Bettie Brooks-Bell. After the untimely passing of her mother when she was 2 years old, she moved to Chicago, Illinois to be loved and cared for by her Uncle Joe and Aunt Mabel Brooks-Edwards. Once she was older, she moved back to Mississippi. Upon the death of her father, she was cared for by her older sister Ms. Earlene Bell. She was preceded in death by her brothers: Mr. Jesse Bell, Mr. James Bell, Mr. Henry Bell Jr. and sisters Mrs. Magnolia Bell, Mrs. Florence Bell-Brown, Mrs. Doris Jones, and Mrs. Thelma Bell-Bunch "Faye", as she was affectionately called, was a proud graduate of Callaway High School where she played the cello in the string orchestra. She was also a graduate of Hinds Commu nity College with an Associates Degree in Office and Business Management. During and after college, Faye was a fashion model, and walked with the Black Foxes of Jackson, MS. She was a small business owner, seam stress, baker, and Licensed Childcare Center Director. Sis. Morris loved children! In her later years she worked as the Assistant Director of Kids Are Kids Learning Center. In the year of 1975, she met the love of her life, Mr. James Morris. They were married December 15, 1979, and to this union, Randy and Sylvia were born In the year of 1979, she made a lifelong commitment to her Lord and Savior Jesus Christ and served Him faith fully until her last breath. She united with Greater New Friendship M.B. under the leadership of Rev. Robert L. Odom. As a dedicated member of this church, she served as a former member of the Inspirational Choir, former Youth Ministry President, and Usher. She served as Deaconess, Sunday School Teacher, and Assistant Sunday School Superintendent until her health no longer permitted her to. Sis. Morris was a true worshipper and altar worker. She stood in the gap and intercessed for many. She allowed the Holy Spirit to flow through her and even in her last days, she still praised God through the pain. She often said that she was willing to go through whatever she had to go through on this side of life so that she could see her Lord and Savior face to face. On Wednesday November 24, 2021 at 11:04a.m. she began her journey. Sis Morris leaves to cherish her wonderful and loving memories to her dedicated husband of 41+ years; Mr. James Morris. She leaves to cherish a rich legacy of love and memories to her son Randy (Stephanie) Morris; and daughter Sylvia Morris both of Brandon, MS. Four grandchildren: Havana, Haylei, Hamiah, and Joshua Morris. One brother, Mr. Roosevelt Bell of Chicago Illinois, Four sisters: Mrs. Sandra Pepper, Ms. Earlene Bell, Mrs. Alma Spivey, of Jackson, MS and Ms. Gloria Bell of Pearl, MS. A loving Mother in Love, Mother Annie Bell Adams. Four Sister's in love: Mrs. Annie Lee Moore, Mrs. Bobbie Moore (Charles Sr.) Ms. Katie Bickham, and Ms. Lue Morris. Two Brother's in love: Mr. Eugene Morris and Mr. Freddie Morris. Four special nieces that grew up with her like sisters: Mrs. Debra Littleton, Ms. Phyllis Barnes, Mrs. Cynthia Smith, and Ms. Pamela Lynn. God-sisters Mrs. Nora An derson, Mrs. Ada Baptiste, and Mrs. Laura Wilson, and Mrs. Patricia Houston all of Brandon, MS. Special Sister-Friends: Mrs. Daisy Johnson, and Mrs. Gloria Clark, and a vast host of nieces, nephews, God-children and God grandchildren, family and friends.

Sis. Dorothy Faye Bell-Morris was born the youngest of 12 siblings in Benton, MS on March 31, 1955 to the late Mr. Henry and Bettie Brooks-Bell. After the untimely passing of her mother when she was 2 years old, she moved to Chicago, Illinois... View Obituary & Service Information

The family of Mrs. Dorothy Faye Morris created this Life Tributes page to make it easy to share your memories.

Sis. Dorothy Faye Bell-Morris was born the youngest of 12 siblings...

Send flowers to the Morris family.