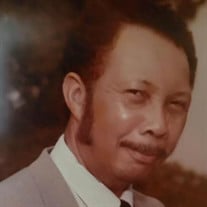 Elex Stewart, 91 went to be with the Lord on Saturday, April 9, 2022, at home in Goshen Springs, MS. He was surrounded by his children and wife. He was born on December 5, 1930, in Ludlow, MS to the late Sam Stewart and Mary Mapp Stewart. The family later moved to Goshen Springs in Rankin County, where he was raised in a Christian home and attended Rankin County Public Schools. One could see very early in his schooling that he was ambitious and wanted to achieve great things in life. He joined Pilgrim Branch Baptist Church at an early age, where he learned the fundamentals of the Christian faith. While growing up in the Goshen Springs community, he met and married his wife, Lillian Evans. They were blessed with 71 wonderful years together. Four beautiful children were born to this union. Elex was strong, hardworking, smart, innovative, trustworthy, loving, kind, compassionate, and a pillar of the community. He loved and adored his wife and children, grandchildren, and great grandchildren. He never failed to give his best in all circumstances. He also treasured his relationships with his son and daughters-in law. As a young husband and father, he was called upon to serve his country. He was drafted by the United States Army and served during the Korean War from 1950-1953. After which he was honorably discharged. Returning from the war, he wanted to make a better life for his family. He then moved to Los Angeles, CA, to pursue greater opportunities. For many years he served as a machinist at the Mueller Company and Compton Forge. He was very successful in that he had a strong work ethic which led to successes in many financial endeavors and thereby leaving a strong legacy to his children. After retiring, he returned to the place of his roots in Goshen Springs. He reunited with Pilgrim Branch Church and became a deacon and a leader in the church. He loved his Pastor, Dr. Robert Moore and first lady Stephanie Moore and the entire church family. Elex lived a life of extraordinary service. He served God, his country, his church, his community, and his family. He was preceded in death by his parents: Sam and Mary Stewart, three sisters; Eunice Brownridge, Pearl Grant. and Betty Smith. He is survived by his wife Lillian Stewart, his sons; Charles, formerly of Los Angeles, CA; Eddie James (Tina) of Compton, CA; William Sam (Lisa) of Los Angeles, CA, and daughter Gail Linson (Leon) of Madison, MS; brother Willie Stewart of Goshen Springs, and sisters: Margie (Charles) Ross, Hattie McGinity. Maryland J. Thompson, Brenda (Walter) Jenkins and Linda (Loyd) Robinson of Canton, MS; four grandchildren; Eric Jason; William Alexander; Patricia Olivia; Evan Justin; and Eion Jamont; one great granddaughter Aaliyah Shimiyah-Jordyn, and one great grandson Elijah Jermaine, and a host of nieces, nephews, cousins and friends. Even as the Son of man came not to be ministered unto, but to minister, and to give His life a ransom for many. Matthew 20:28

Elex Stewart, 91 went to be with the Lord on Saturday, April 9, 2022, at home in Goshen Springs, MS. He was surrounded by his children and wife. He was born on December 5, 1930, in Ludlow, MS to the late Sam Stewart and Mary Mapp Stewart. The... View Obituary & Service Information

The family of Mr. Elex Stewart created this Life Tributes page to make it easy to share your memories.

Elex Stewart, 91 went to be with the Lord on Saturday, April...

Send flowers to the Stewart family.