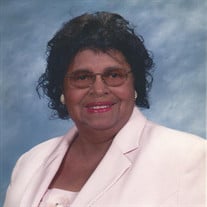 Emma Corine Carter Davis was born in Bolton, Mississippi on February 5, 1936 to Morgan and Cbell Thomas, who both preceded her in death. Three brothers, three sisters, one son (Bruce), one granddaughter (LaCretia) also preceded her in death. She departed this life on January 26, 2022 in the home of her daughter, Frances Stringer, with her sons, Tony Carter, Jr. and Kenneth Carter at her side also. She accepted Christ as her personal savior at an early age at the St. Thomas Baptist Church in Bolton, MS. She attended Campbell High School/College, and worked at the State Hospital of Mississippi, located in Whitfield. She was United in holy matrimony in June of 1954 to Tony Carter, Sr. and to this Union four children were born, Tony Jr., Frances, Kenneth and Bruce. After the death of her husband, Tony, she married Clarence Davis of Detroit, MI. in 1987. They divorced in 1998. Her three living children gave her eight grandchildren, Latonia, Dustin, Michael Jr., Jasmine, LaCretia, Tony III, Bruce II, and Andre. She also had twenty four great grands, and one great great grand. She was a faithful member of the Mt. Elam Missionary Baptist Church in Pearl, Mississippi until her health made it too difficult for her to attend. She served in various capacities in the church while she was able. She leaves to cherish her memories: her children, Tony Carter, Jr. (Francine), Frances Stringer, Kenneth Carter, seven grands, twenty four great grands, and one great great grand, eight siblings, Meredith Donald of Meridian, MS, Alice Alexander, of Pearl, MS, Annie Carmack, of Bolton, MS, Catherine Harvey of Pearl, MS, George Thomas (Elese) of Jackson, MS, J. H. Thomas of Bolton, MS, Jimmy Thomas of Bolton, MS, Alex Thomas (Doris) of Jackson, MS and also a host of nieces, nephews, relatives and friends.

The family of Mrs. Emma Carter Davis created this Life Tributes page to make it easy to share your memories.

Send flowers to the Davis family.