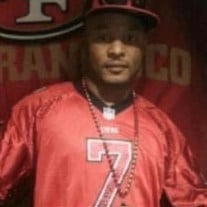 Ennis Joe Locke, III was born on December 3, 1979 in Chicago, Illinois to Ennis Joe Locke, Jr (Bo) and JoAnn Smothers Locke. At an early age, Joe accepted Christ at Christian Union M. B. Church in Tougaloo, MS. In later years, he became a member of Greater Mount Calvary Baptist Church located in Jackson, MS. Joe graduated from Provine High School in 1998. He continued his education at Hinds Community College in Raymond, MS. He was employed with Baker Engineering and NuCor Steel. He was a man of many gifts that made room for him throughout his life, including being an entrepreneur. Joe owned Locke Transportation. He has passed down many gifts throughout his life and will be forever missed by the entire community he touched, where he was extremely active. Joe played kickball for YELL-O-JACKS, basketball for the Greater Mount Calvary and the Lakers, and football for the Longhorns. He loved mud riding, playing card games and dominoes, cheering for the San Francisco 49ers, and supporting Miami Hurricanes and Jackson State University Thee I Love at The Veterans Stadium on Saturdays. Joe Locke was an active Masonic member with M.W. Stringer Grand Lodge. He began his masonic affiliations in 2008. He belonged to John R. Archer Lodge 714, Ahura Mazda #62, Re'ah Melek Council 15, Gregory Anderson Commandery #5, Jackson Consistory 117, and Taj Mahal 137. For his work had been completed, and he has received his heavenly reward and several earthly rewards in his lifetime. On Sunday, April 10, 2022, he entered into the arms of the Lord. He was preceded in death by his mom, JoAnn. Those who remain to mourn his passing are his loving wife, Camisha; daughter, A'Lia; son, Jaylynn; father, Bo; sister KoNessia (Ernest); nieces Sherrell (Jimmy) and KeLeshia; nephew, Joseph; mother in laws Dora Cobbins and Karen Cobbins; brother in laws Derrick James and Demetric Gallion; special friends, Jonathan Cottrell, Johnny Griffin III, and Denetra Kendrick; and a host of aunts, uncles and cousins.

The family of Mr. Ennis Joe Locke III created this Life Tributes page to make it easy to share your memories.

Send flowers to the Locke family.