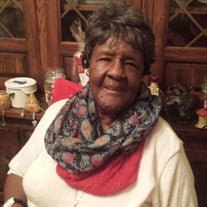 On Wednesday, November 20, 2019, our heavenly Father reached down and called Essie Mac Jones-Young to eternal rest and peace. She was born on September 12, 1935 in Brandon, Mississippi to the late Amanda Mayers and Ed Henry Randolph, Essic acccpted Christ as her Savior at an carly age and joined Konc Hill Baptist Church. She attended Rankin County Schools until she moved to Gulfport, Mississippi in 1953. Essie received her high school diploma from 33 Avenue High School in 1955. Gulfport, Mississippi was where she met her future husband Jack. L. Young; they were married in 1955. With this union, five children were born. Preceding Fissie in death were her three sisters and three brothers. Eissie and her family relocated to Jackson, Mississippi in 1956. She began working as a Housekeeper/Babysitter for several different families. Essie also worked at Lakeland Nursing Home and Jackson Ilinds Comprchensive I lealth Center. After relocating to Jackson, she found her church home in Washington Temple C.M.E. Church where she was a devoted and faithful member until she was unable to attend. At Washington Temple, Essie held many offices/positions such as: Sunday School Teacher, Sunday School Treasurer, and Sunday School Superintendent/Secretary and she enjoyed her first Fridays of cach month with her church family. We cannot forget her love for flowers which she cherished so much. Essic loved her flowers, she called them her babies; they were outside in the summer for sunlight and inside for winter, so frost would not get on them. Essie leaves to cherish her memories five children: Burnidette Paula Herring (Raephellc) of Marysville, California, Daisy Marie (Eli) of Jackson, Mississippi, Benjamin Sr. (Melody), special friend of Angeles, Philippines, Jacqueline Young of Clinton, Mississippi, and Michael Sr. (Sylvia) of Homestead, Florida. She also leaves twelve grandchildren: Yusef, Jadrien, Brianne, Yumanuel, Benjamin Jr., Michael Jr., Laquisha, Jansen, Renycia, Ashton, Mackenzie, Brandon, four great-grandchildren: Michael III, Lemcka, Dawson, and Jade, five siblings: three sisters and two brothers, two sister-in-laws, one brother-in-law, and a host of nicces, nephews, relatives, and friends.

On Wednesday, November 20, 2019, our heavenly Father reached down and called Essie Mac Jones-Young to eternal rest and peace. She was born on September 12, 1935 in Brandon, Mississippi to the late Amanda Mayers and Ed Henry Randolph, Essic acccpted... View Obituary & Service Information

The family of Ms. Essie M. Young created this Life Tributes page to make it easy to share your memories.

Send flowers to the Young family.