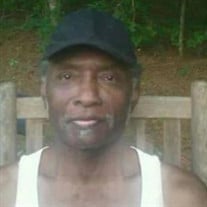 Eugene McIntyre, Sr. was born on May 8, 1943 in Brandon, MS, to the late Wesley and Willie Mae "Big Mama" McIntyre. Eugene was affectionately known by many as "Gene" and "Pop" to his grandchildren. Eugene accepted Christ at an early age at... View Obituary & Service Information

The family of Mr. Eugene McIntyre Sr. created this Life Tributes page to make it easy to share your memories.

Send flowers to the McIntyre family.