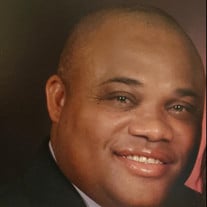 Today we celebrate the home going of a beloved husband, father, grandfather, brother, nephew, uncle and friend to many. He was a kind hearted man who stood strong man in his beliefs. Felix M Potter was born on December 25, 1961 in Florence, Mississippi to the late Senior Davis and Jewelene Thames Potter. He was the middle child of the six children born to this union. Several loved ones have gone on to glory to welcome Felix home: his parents, grandparents, father-in-law (Joe C. Sayles), brothers(Edgar Foote, James & Ricky Potter) and borther in-law, Jonathan Sayles. Felix grew up in Star, MS where his mother instilled in him the importance of family, hard work, faith and caring for others. He attended McLaurin Attendance Center until the schools integrated and he went on to graduate from Florence High in 1979. While at Florence High school, he enjoyed playing football and running track. He also attended Jackson State University where he met his lifelong god-brothers, William Beverly and Don Ervin. On June 16, 1981, he married his highschool sweetheart, Linda D. Sayles and to their union they had one child. At an early age, he confessed Christ and joined the Rock Hill MB Church where he received his formal knowledge of Jesus Christ. He later joined Brown Hill MB Church where he served faithfully as a Trustee and sang in the Male Choir until his health began to fail him. His strong belief in Christ and faith was his foundation throughout his entire life. Felix loved his family and he worked hard to take care of them and spending time with them was his priority. He had a great sense of humor, never met a stranger and was always willing to help or give a word of advice to anyone. He was affectionately known as "Blue" by many of his friends and family members. To know Felix was to know that he loved his Dallas Cowboys' football team, playing golf, competing with his brothers to be the best. He also enjoyed fishing with his brothers and close friends, watching Sports Center and action movies. Whereas our almighty God in his infinite wisdom saw fit that it was his time for Felix to enter into his gates. God whispered "come home my good and faithful servant" on November 1, 2019. He leaves to cherish his memories his devoted and loving wife of 35 years, Linda D. Potter; his daughter Alexandria and son-in-law, Joshua D. Amos. He also leaves his brothers, Charles (Brenda) Thames of Anderson, SC, Curtis Potter of Jackson, MS : Eddie (Sallie) Harper of Jackson, MS, his sister, Ruth Potter of Florence, MS and sister-in-law, Martha Potter. Felix was also the proud grandfather of three (3) grandchildren: Nickolas, Chase and Ryan Amos. Other family members include his mother-in-law, Christel N. Sayles (whom he called his other mother), brother-in-laws, Joe (Melissa) Sayles of Virginia Beach, VA; Joel Sayles of Byram, MS, Calvin Sayles of Richland, MS and sister-in-law, Flésia (Marcus) Harper, of Richland, MS and god brothers Don Ervin and William Beverly. There are a host of aunts, uncles, nieces, nephews, cousins, and friends who loved and will greatly miss him. We are thankful to God for the 57 years He allowed Felix to be such an important part of our lives.

Today we celebrate the home going of a beloved husband, father, grandfather, brother, nephew, uncle and friend to many. He was a kind hearted man who stood strong man in his beliefs. Felix M Potter was born on December 25, 1961 in Florence,... View Obituary & Service Information

The family of Mr. Felix Mantee Potter created this Life Tributes page to make it easy to share your memories.

Today we celebrate the home going of a beloved husband, father,...

Send flowers to the Potter family.