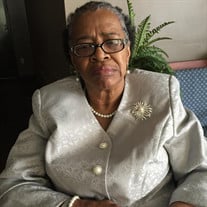 Flora Bell Kersh Collier was born August 19, 1946 in Brandon, Mississippi to the late Leroy Kersh, Sr. and Lucile Washington Kersh. She was the fifth of eleven children. She accepted Christ at an early age and was baptized at Mountain Ridge United Methodist Church. She later joined Jordan Grove M. B. Church where she remained a member until her final days. She attended Kone Springs School in Rankin County, Mississippi during her elementary years. She later attended and graduated from McCall High School in Pelahatchie, Mississippi. She would go on to receive a certificate from Hinds Junior College. She was united in marriage to Chester J. Collier in 1964. They were blessed with two children, Angela and Michael. She later met John S. Chatman of Madison County, Mississippi. To this union one child, Alesha, was born. Flora was first employed at Stanwood Sewing Factory in Pelahatchie, MS where she worked as a professional seamstress. She later worked for Norman Shirt Factory and Frito-Lay both in Jackson, MS. She went on to begin a career at Siemens Industry, Inc. where she was employed for thirty-four years be fore retiring in 2013. A devout servant of the Lord, Flora always seized the opportunity to help someone in need. When ever and wherever she encountered someone who needed a helping hand, she willingly gave of her time and resources to help meet their needs. She never met a stranger. Moreover, she exemplified her faith in God through her walk and compassion for others. Flora was a very hard working woman and mother. She taught her children values and morals according to the Word of God. She always took her children to church and instilled in them the many lessons concerning good citizenship, being obedient, and living a Christian life. In 2014, her health began to fail. Unfortunately, she never completely recovered. She departed this life on August 24, 2019. Flora's parents and four siblings, A. J. Kersh, Charlie Kersh, Mae Bell Kersh, and Willie Kersh all preceded her in death. She will be cherished, loved, and remembered by her children, Angela Collier Martin of Brandon, MS, Michael (Stephanie) Collier of Jackson, MS, and Alesha Collier of Jackson, MS; five sisters, Gladys Catchings of Gulfport, MS, Hattie Hobson of Brandon, MS, Earie (Carl) Burch of Brandon, MS, Ruby Watford of Indianapolis, IN, and Lavernon Kersh of Brandon, MS; one brother, Leroy Kersh, Jr. of Brandon MS; six grandchildren, Michael Small, Jr., McKenzie Small, Justin Collier, Omar Burton, Ernest Martin, Jr., and Kyndal Lewis; one great-grandchild, Matthew; and a host of nieces, nephews, cousins, and friends.

Flora Bell Kersh Collier was born August 19, 1946 in Brandon, Mississippi to the late Leroy Kersh, Sr. and Lucile Washington Kersh. She was the fifth of eleven children. She accepted Christ at an early age and was baptized at Mountain Ridge... View Obituary & Service Information

The family of Ms. Flora Bell Collier created this Life Tributes page to make it easy to share your memories.

Send flowers to the Collier family.