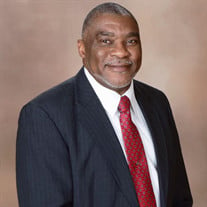 "I have fought the good fight, I have finished the race, I have kept the faith. Now there is in store for me the crown of righ teousness, which the Lord, the righteous Judge, will award to me on that day-and not only to me, but also to all who have longed for his appearing." 2 Timothy 4:7-8 A Time to Be Born Frank James Herring was the sixth child born to the late John Herring & Luetena Phillips Herring on August 1,1957 in Doddsville, MS. Frank accepted Christ at the early age of 9 and was baptized at New Bethlehem Baptist Church in Doddsville, MS where he was ordained as a Deacon. Frank later moved to Brandon, MS and joined True Vine Baptist Church. He served faithfully in the Deacon's Ministry and Prison Ministry. He also served as Personnel Chair. Frank was an amazing Sunday School Teacher. He was a servant leader of God sharing his time, gifts, and talents whenever there was a need. At Time to Plant Frank J. Herring received his high school diploma from Amanda Elzy High School in 1975 in Greenwood, MS. He continued his education at Alcorn State University in Lorman, MS, where he received his Bachelors of Science Degree in Chemistry. One of his collegiate highlights was being initiated into the Phi Beta Sigma, Inc. Fraternity. Shortly after graduation, he began his career at Baxter Health Care Corporation (formally known as Travenol). Seventeen years later, he changed his career path and entered the food processing industry with Tyson Food, Inc. in Cleveland, MS. He relocated several times climbing the ladder in management to Jackson and Newbern, TN and Augusta, GA. Frank traveled the United States as a Senior Auditor for Siliker out of Aurora, IL before planting his roots in Brandon, MS. He reluctantly retired after 15 years due to health reasons from Koch Foods in Morton, MS as a QA Manager. A Time to Love Frank married Sandra Herring in 2005 in Cleveland, MS. He adored Sandra and was a devoted husband. Frank was a loving father, nurturer, and provider who raised one (1) son and four (4) daughters. He was deeply family oriented and always traveled extensively to support his children and grandchildren in all of their endeavors. Frank was a very kind and humble person who endeared himself to many. He loved life to the fullest, his energetic spirit and infectious smile attracted many friends. Frank was an avid sports enthusiast. For many years, he played in an adult baseball and basketball league. He faithfully supported the local high school teams in support of area youth. A Time of Transformation Frank transitioned peacefully from this earth on Sunday, August 15, 2021 at home surrounded by loved ones. Frank was a man of God and looked forward to sitting at His feet. A Time of Remembrance Frank was loved by many and will be missed by all who knew him. He was preceded in death by his father John Herring (1990), his mother Luetena Herring (2000) and two brothers John W. Herring (2019) & Sammie Herring (2005). His memories will be cherished by his devoted wife, Sandra Herring; his five children; Narvarr (Shermicka) Gordon (Rowlett, TX), Kandis Herring (Dallas, TX), Keontaye Webb (Jackson, MS), Kimberly (Willie) Walls (Grayson, GA), Kierra (Joseph) Handy (Ridge land, MS); Nine Grandchildren- Nicolas Gordon, Noah Gordon, Tishira Moore, Triston Webb, Katelynn Walls, Chloe Walls, Karsyn Walls, Kari Walls, and Karter Handy; his siblings Gladys Pruitt (Doddsville, MS), Ruby Sanders (Drew, MS), Charles (Barbara) Herring (Drew, MS); sister-in-law, Lois Herring (Charleston, MS) and a host of nieces, nephews, cousins and countless friends.

"I have fought the good fight, I have finished the race, I have kept the faith. Now there is in store for me the crown of righ teousness, which the Lord, the righteous Judge, will award to me on that day-and not only to me, but also to all who... View Obituary & Service Information

The family of Mr. Frank James Herring created this Life Tributes page to make it easy to share your memories.

&quot;I have fought the good fight, I have finished the race, I have...

Send flowers to the Herring family.