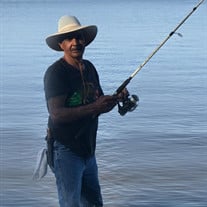 Il Corinthians 5:8 KJV "We are confident, I say, and willing rather to be absent from the body, and to be present with the Lord." Glenn, often called "Streets", was a fun loving person, who never met a stranger. He was an avid New Orleans Saints fan. He was jovial, energetic (Where's Waldo?), warm and loved to dance. Glenn was born December 10, 1959 in New Orleans, Louisiana. He was the fifth child born from the union of Elton Sr. and Evangeline Madison. Glenn was educated in the New Orleans Public School System. He also attended Delgado Community College where he received his certification and became a Master Plasterer. He began his craft under his grandfather's mentorship along with other members of his family. Much of his work can be seen in the French Quarter and Garden District in New Orleans. In 1988 while still living in New Orleans, Glenn married the love of his life, Tracy A. Webb. To this union two beautiful daughters were born. Glenn obeyed the gospel in the late 80's at the Church of Christ (Elysian Fields Ave., New Orleans, LA) under the leadership of Brother Charles Toney. After relocating to Florence, Mississippi in 1992, his home congregation became the Church of Christ on Hanging Moss Rd. (Jackson, MS) under the leadership of Evangelist Curtis W. Pittman. Later in life he acquired many other skills. He became a chauffer, a landscaper, a handyman, the pool guy and entertainer at all of the family gatherings. One of his (Tracy's) favorite holidays was Christmas. He often competed with his sisters-in-law decorating the houses and yards. Summertime was especially exciting because of his famous crawfish boils, Reggae music blasting and his signature dance moves. Some of his famous sayings were: "I was doing good but I got over it", "What's understood don't have to be explained", "If you see something you ain't seen before, throw a dollar at it", "Take a pause for a worthy cause", "It's not the fall but the sudden stop that gets you". When asked, "What are you doing?", he would reply: "Minding my business. What are you doing? Minding my business." Glenn was preceded in death by: his son, Glenn Copeland, "lil Glenn", his father, Elton Madison Sr., six brothers and Elton Jr., Kevin, Derek, David, Toney Hunt, and Cedric Hunt. His memory will be cherished by his devoted wife, Tracy Madison, three daughters, Tina Harris, Misty Ealey (Ronnie), and Whitney Montgomery (Xavier). Five grandchildren, Glenn Dantzler, Amiya Stanard, Amelie', Nova and Israel (due to arrive any day now). His godchildren, Ashley Fassitt, Mahogany Bogan, Ricardo Young and Kyhi Hayes. His beloved mother, Sister Evangeline Madison. Two sisters, Rosalind Webb and Kathleen Mercadel, and a host of loving relatives and friends.

Il Corinthians 5:8 KJV "We are confident, I say, and willing rather to be absent from the body, and to be present with the Lord." Glenn, often called "Streets", was a fun loving person, who never met a stranger. He was an avid New Orleans Saints... View Obituary & Service Information

The family of Mr. Glenn Madison created this Life Tributes page to make it easy to share your memories.

Il Corinthians 5:8 KJV &quot;We are confident, I say, and willing...

Send flowers to the Madison family.