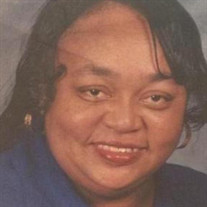 "Blessed are the dead which die in the Lord from henceforth: Yes, saith the Spirit, that they may rest from their labours, and their works do follow them." Rev. 14:13 Mrs. Gloria "Jean" McNair was born July 26, 1954, to the union of Mrs. Ruby and the late Clarence Jones, Sr. She made her heavenly transition January 15, 2021 at 11:54pm. Gloria, affectionately known as "Jean" to family and friends, attended Brandon schools until she graduated in 1972. On August 8, 1987, she was united in Holy Matrimony to Richard McNair. To this union they had one daughter, Ember. She was a born again believer, she had accepted, confessed and acknowledged that Jesus Christ was her Lord and Savior at an early age. She began her spiritual journey at Saint Hill Church of God in Christ. As an adult, she became a member of Pilgrim Rest in 2001 under the pastorate of Dr. Ava S. Harvey, Sr.. where she remained faithful until her passing. During her time at PRMBC, she served faithfully with the kitchen ministry, helping with Meals on Wheels and serving meals after service until her health began to fail her. Gloria was known for her hard work throughout her life. She worked at Hinds Community College as a custodian from 1998 until her retirement in 2010. Gloria was preceded in death by her father, Clarence. She leaves to cherish her loving memory: her husband, Richard McNair, of Brandon, MS; a daughter, Ember McNair, of Brandon, MS, her mother Ruby Jones, of Brandon, MS; one sister, Thelma (John) Taylor, of Brandon, MS; three brothers, Clarence (Yvonne) Jones, Jr. of Canton, MS, Perry (Dora) Jones, of Brandon, MS, and Connie Ray (Deborah) Jones of Brandon, MS; three grandchildren, Jadyn, la Mya, and Jordyn Love, of Brandon, MS; two sister-in-laws. Katherine (Clyde) McIntyre-Lee of Brandon, MS and Marilyn Whitfield of Balch Springs, Texas, one brother-in-law, Jamie (Barbara) Brooks of Cleveland, MS; one step daughter, Rachel Fairley of Brandon, MS, two aunts, Betty Jones of Brandon, MS and Willie Lee McLaurin of Chicago, IL, one uncle, John Henry (Ruby Jean) Walker and a host of nieces, nephews, cousins and friends whom she loved dearly.

"Blessed are the dead which die in the Lord from henceforth: Yes, saith the Spirit, that they may rest from their labours, and their works do follow them." Rev. 14:13 Mrs. Gloria "Jean" McNair was born July 26, 1954, to the union of Mrs. Ruby... View Obituary & Service Information

The family of Mrs. Gloria J. McNair created this Life Tributes page to make it easy to share your memories.

&quot;Blessed are the dead which die in the Lord from henceforth:...

Send flowers to the McNair family.