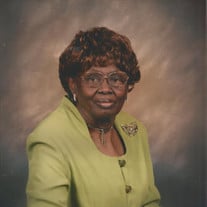 Ms. Grace Katherine Morrow was born July 13, 1928, to the late Arrette Bell and Phil Taylor in Brandon, Mississippi. She made her heavenly transition March 28, 2021. Grace, affectionately known as "Ma Missie and Aunt Missie” to family and friends, attended Pilgrim Rest Church School in the Evergreen Community of Brandon, Mississippi. Ma Missie loved to travel and lived in New Orleans, Louisiana and Indianapolis, Indiana earlier in life, however, she resided in Mississippi for the main course of her life. She was raised by her grandparents Boss and Minnie Bell Weakley and attended Saint Hill Church of God in Christ in Brandon, Mississippi. Later, she was united with Pilgrim Rest Missionary Baptist Church of Brandon, Mississippi under the leadership of Reverend Eddie Terry until his death. Reverend Richard Helom served as her pastor for many years and Dr. Ava S. Harvey, Sr. was his successor and had been her pastor for over twenty-four (24) years. Before the COVID-19 epidemic, she followed Dr. Harvey to various places he had to minister. She served on the usher, choir, clothing, and kitchen ministries at Pilgrim Rest and a was a senior church mother too. Grace married L.E. Morrow and to this union, four children were born, Sarah Ann, Willie L. Eddie Alonzo, and Moses Ree.She was employed at the Mississippi State Hospital in Whitfield, Mississippi for over nineteen (19) years as a warden supervisor. Throughout the community, she was well known and notorious for being a disciplinary, baby sitter and life of the party wherever she went. Her favorite pass times were, working in her flower beds, cooking, traveling, fishing and sewing Ma Missie did not go anywhere without her pocket knife! No matter who you were, she would braid a pisselam switch that she had you to personally pick and whip you if she felt you needed it. She later graduated to using a walking cane to discipline the young and the old. Because of her love for traveling, she fellowshipped often with Evergreen United Methodist Church and was a member of the "Forever Young", a senior saints ministry that gathered twice monthly. Preceding her in death was her husband, L. E. Morrow; two (2) brothers; Boss Esau Harvey and Jimmy Harvey and one (1) sister, Birdie Ree "Bell" Harvey; one (1) son, Willie L. Morrow, Sr. and one great-grand daughter, Diamond Morrow. She leaves to cherish her loving memory: three children: Sarah Gilchrist of Memphis, Tennessee, Eddie (Ruth) Morrow of Dumas, Arkansas and Moses (Robert) Agee of Brandon, Mississippi; twenty-one (21) grandchildren, forty-four (44) great grandchildren, one (1) great grandchild; one (1) one brother, Samuel (Bobbie) Harvey of Brandon, Mississippi and one (1) sister-in-law, Ella Jean Harvey of Las Vegas, Nevada. She also leaves special nieces and a nephew that she loved and cared for as her own, Victor, Monica, Jean and a special friend, Minister Tillman and a host of nieces, nephews, cousins and friends whom she loved dearly.

The family of Mrs. Grace Katherine Morrow created this Life Tributes page to make it easy to share your memories.

Send flowers to the Morrow family.