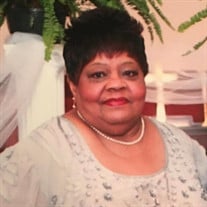 Harvie Lee Collier Lofton was born on November 7, 1941, in Brandon, Mississippi to Harvey and Bertha Gipson Collier. She gave her life to Christ at an early age and became a life-long active member of Mountain Ridge United Methodist Church. Harvie Lee was a proud Lanier High School graduate and went on to attend Tougaloo College. Later in life, she attended Mississippi College. Harvie married the love of her life, Wilbert Lofton, on July 10, 1965, and they were married for 54 years. To this union, three beautiful girls were born of which she was very proud. She was known to brag to anyone who would listen about her daughters and their accomplishments. Although Harvie Lee began her career working in the lab at University Medical Center, her passion was education. She started driving the school bus for Pelahatchie Attendance Center and soon pursued her passion for education and became a teacher's assistant at Pelahatchie Elementary. She touched the lives of the many students that crossed her path. They looked forward to her loving hugs, smile, and encouragement. She retired from the school system after 20 years of service. Harvie Lee was considered by many as the "Backbone” of Mountain Ridge United Methodist Church. She er church, and her church family and was willing to serve in any capacity that she could. She was an active member up until the time of her death. Harvie Lee took after her mother and loved to sing. As a young lady, she began singing as part of The Collier Singers that travelled all over the state singing at different churches and continued as one of the leaders in the church choir for decades. When her health failed and she couldn't be with the choir in the choir stand, she continued to participate and sang from the front row of the pews. She continued to support the various ministries of the church until the Lord said, “Well done my good and faithful servant” and called her home to be with Him and rest. Harvie Lee Lofton was preceded in death by her parents, Harvey and Bertha Collier; brothers, Harvey (H.J.) Collier, Earnest Collier, and Jerry Collier as well as her sister, Velma Ree Lock and granddaughter, Kennedy Alise Gibson. She leaves to cherish her memories a devoted husband, Wilbert; three daughters, Amy Lofton of Richland, MS, Felicia (Quincy) Burton, and Christina (Richard) Gibson, both of Brandon, MS; her special niece, Miranda Newsome; sisters, Earline (James) Redd, Carrie Jean (Willie James) McCollum, Eva Mae (Ben) Mangum, and Ruegeaner (James) Longino; brothers, Earsell (Carrie) Collier, Lonnie (Betty) Collier, and Walter (Hazel) Collier; sisters-in-law, Janie Collier, Mrytle Jones, Flora Evans, and Mary Lofton; godsons Jernard Newsome and Colby Mozee; as well as a host of nieces, nephews, cousins, and friends.

Harvie Lee Collier Lofton was born on November 7, 1941, in Brandon, Mississippi to Harvey and Bertha Gipson Collier. She gave her life to Christ at an early age and became a life-long active member of Mountain Ridge United Methodist Church.... View Obituary & Service Information

The family of Mrs. Harvie Lee Lofton created this Life Tributes page to make it easy to share your memories.

Send flowers to the Lofton family.