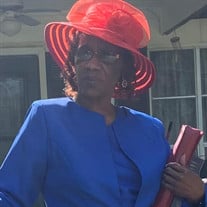 Ms. HenryLee Barnes, affectionately known by her family as Mamma, Maw-Maw & Grandma was born August, 4, 1935 to the late Floyd & Louise Wooten in Cato, Ms. Growing up in a family of many children; she quickly learned the importance of education and hard work. Ms. HenryLee was also introduced to the church at an early age and Greater New Friendship became her home church. In 1955, she completed her education at Carter High School in Brandon, Ms. A year later while visiting her sister in Chicago, Ill; she met and eventually married the late Mr. Leroy Barnes. To their union, 5 children were born: Valerie, Floyd, Dennis, Tracy and Anita. In 1975, the Barnes Family packed up and moved back home to Mississippi. Ms. HenryLee then became employed by The Cable Plant for several years until she was hired as a supervisor at the Ms. State Hospital where she worked for over 20 years. After retiring, she enjoyed traveling, gardening and fishing. What she loved most though, was her family. Ms. HenryLee LOVED being with her family, loved to see them all together, laughing and having a good time, it did her soul good. Another love she had was her church where she had been a faithful member until her health declined. She was indeed a very proud Friendship Church Mother. Ms. HenryLee peacefully departed this life on July 23, 2021 with her family by her side. She leaves to cherish her memory Valerie(Sherman) Glass of Jackson, Ms; Reverend Dennis(Sandra) Barnes of Jackson, Ms; Tracy Lynn(aka Tray) of Brandon, Ms; Anita(Chuck) Johnson of Brandon, Ms and one honorary daughter; Shanna(Jeremy) Spann of Brandon, Ms; five sisters: Ruby Nell Anderson and Helen Conner, both of Brandon, Ms: three sisters that preceded her in death Inez Collier, Mable Thigpen and Pearlie Mae Harvey, five brothers; Eddie Wooten of Brandon, Ms; four brothers that preceded her in death Carlton Wooten, Belton Wooten, Cleven Wooten, and Welton Wooten, 13 grandchildren, 16 great-grandchildren and a HOST of nieces, nephews, relatives and friends.

Ms. HenryLee Barnes, affectionately known by her family as Mamma, Maw-Maw & Grandma was born August, 4, 1935 to the late Floyd & Louise Wooten in Cato, Ms. Growing up in a family of many children; she quickly learned the importance of education... View Obituary & Service Information

The family of Mrs. Henry Lee Barnes created this Life Tributes page to make it easy to share your memories.

Ms. HenryLee Barnes, affectionately known by her family as Mamma,...

Send flowers to the Barnes family.