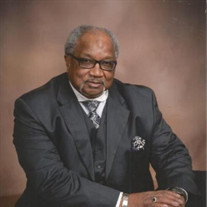 Henry C. Norwood was born on February 7, 1947, in Florence, Mississippi, to the late Ellis Norwood Senior and Geraline Norwood. He was the fourth child of ten children. Henry C. transitioned to eternal life on Monday afternoon August 3, 2020 at 4:08 p.m. He was preceded in death by three siblings: Frank Norwood, Lenora Johnson, and Johnnie Paul Norwood, also his Mother in Law, Ms. Julia Harris. Henry accepted Christ at an early age. He joined the Brown Hill Missionary Baptist Church in Florence, Mississippi. He attended Sunday School faithfully and became a Sunday School Teacher and carried that title and then became a Deacon of Brown Hill Missionary Baptist Church until God called him to preach and teach his Word. He received his certificate and license in August 1992 and was Ordained in November 1992. After being under the leadership of Pastor Willie William, Rev. Henry C. Norwood became the Pastor of Bright Star Missionary Church where he was Pastor for many years. In 2001, he became Pastor of Greater Gethsemane Missionary Baptist Church, 3344 Livingston Road, Jackson, Mississippi, where he was Pastor until the Lord called him home! Pastor Norwood Loved his Greater Gethsemane church family and without a doubt they Loved him just as much. Joe, as he was known by many, attended McLaurin High School and ohh the stories about how great he was in football. He graduated with the Class of 1967. He enjoyed cutting paper wood, playing baseball with a team called the Cubs, where he enjoyed those weekend games. He was also a faithful and active member of the Masonaires Male Chorus for 51 years. Pastor Henry C. Norwood served as the Vice President of the Copiah County Ministerial Alliance where he received the Servant Award on December 20, 2019. Joe was employed with ERGON Inc in Flowood, MS for 33 years. He made history in this company by being the first black individual that worked as the Mailroom Supervisor. Ergon was something that he looked forward to each day. Being the face that many would see first as Ms. Cathy Stone and the Ergon family called him their “Joseph." In his leisure time, he decided to return back to school and earned his Master's Degree in Theology, he also enjoyed watching his favorite football team the New Orleans Saints. Pastor Norwood enjoyed Serving, Singing and Praising God anytime and anywhere. What brought joy to his heart was spending time with his children and grandchildren who called him "Papa Joe." He truly loved his children and grandchildren, and you could not beat him smiling whenever they were singing or performing their talents, he would always say "Y all know who children or grandchildren those were with that big smile. Pastor Henry C. Norwood leaves to cherish a loving wife of twenty-six years, Cathy Rose Norwood; six children: Derrick (Ernestine) Johnson of Florence, MS, Sonya Norwood of Monroe, GA, Sokino Norwood, Shanta Norwood, Santa' (Richard) Keyes all of Richland, MS, and Teddy (Coronda) Watson of Brandon, MS; six siblings, Ellis (Cleo) Norwood Jr., and Senator Sollie (Joan) Norwood both of Jackson, MS, Christel Sayles, Cassandra Sampson, Bernice Fields, and Herman (Barbara) Norwood all of Florence, MS; twenty-three grandchildren and nineteen great-grandchildren; a godsister, Geraldine Kelly, and a host of nieces, nephews, cousins and loving friends.

The family of Mr. Henry C. Norwood created this Life Tributes page to make it easy to share your memories.

Send flowers to the Norwood family.