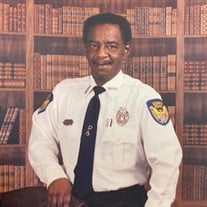 Mr. Herman Taylor Sr. was born on February 26, 1944, to the late Mr. Hardy Sr. and Mrs. Mary E. Taylor. He was the oldest of eighteen children. On July 17, 2020, at the age of 76, he quietly went home to be with the angels at Crossgates River Oaks Hospital in Brandon, Mississippi. On January 2, 1971, he was united in Holy Matrimony to the late Ruth Bankhead Taylor, and to this union one son was born. Herman's early education started at Jim Hill High School in Jackson, MS. He confessed his life to Christ at an early age and was a member of Mt. Elam M.B. Church where he attended until his health failed. Herman was well known in the community and was loved by many. He would help in any way he could, as long as you listened to his reasoning. He worked many years with his best friend John Moore, of Moore Construction Company. In 1980, he started working for the Mississippi State Hospital Police Department where he served as Assistant Chief on B-shift until 2004 when his health started to fail. He was very dedicated to his job. He worked on his off days and never took a vacation. When he retired, he had enough time to cover his pay for two years. He never called sick or to report that he would be late. He always told officers that he never got tired of working. He was very blunt in telling officers they were lazy for not working overtime and for calling in sick. After retirement, he enjoyed fishing, baking (the best pound cakes), and spending time with family and friends. He would walk around with that afro comb in his back pocket. According to him, if you didn't own a Ford vehicle, you didn't own anything. Ford should have been his first and last name, and his son has kept the Ford tradition going. Herman was preceded in death by his wife Ruth Bankhead Taylor; parents, Hardy and Mary Taylor Sr; siblings, Hardy Taylor Jr., Bertha Liddell, Mary Denson, Ralf Taylor, Preston Taylor, and Shelia Sylvester. Herman leaves to cherish his memories, one son Herman (Sharon) Taylor, Jr. of Pearl, MS; five daughters, Debra Stevenson of Southaven, MS, Ruth (Henry) Rosco of Belzoni, MS, Angela (Calvin) Brown of Greenville, MS, Bridgette Ridgeway of Milwaukee, WI; five brothers, James Taylor, Sr., Richard (Natalie) Taylor, Milton (Lillie) Taylor of Pearl, MS, Steve Taylor, Sylvester (Carolyn) Taylor of Jackson, MS; six sisters, Doris (Perry) Magee, Sandra McBride, Lois Taylor, Sheryl Taylor of Pearl, MS, Landis Singleton, Patricia Taylor of Jackson, MS, Valerie Young of Atlanta, GA; nine grandchildren, Jhasmine, Bryson, Lakeshia, A’kyria, Cherae, Kim, Calvin, Andrew, and Kendall; one great-grandchild, Tyler; two sister-in-laws, Mrs. Liz Taylor and Ms. Betty Bankhead; two aunts, Mrs. Emma Carter and Mrs. Jewel Carter; a special cousin, Charles (Mook) Coleman; four special nephews Rod Magee, Reverend Dejarius "Frank" Macklin, Jeffery Bankhead, and Lawrence Bankhead; a host of many nieces, nephews, relatives, and friends.

Mr. Herman Taylor Sr. was born on February 26, 1944, to the late Mr. Hardy Sr. and Mrs. Mary E. Taylor. He was the oldest of eighteen children. On July 17, 2020, at the age of 76, he quietly went home to be with the angels at Crossgates River... View Obituary & Service Information

The family of Mr. Herman Taylor Sr. created this Life Tributes page to make it easy to share your memories.