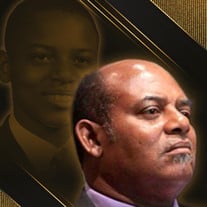 Our beloved, IRA LEE SINGLETON, JR. was born on May 23, 1947, in Hinds County, MS to the late Havron Taylor-Sin gleton and the late Ira Lee Singleton, Sr. Ira was the youngest of two children. Ira united with Jerusalem Missionary Baptist Church at an early age where he was a loyal and faithful servant until his death. While at Jerusalem Missionary Baptist Church, Ira served as a Trustee, Deacon, Youth Choir Director, church bus driver, Sunday School teacher and was a member of the Male chorus. Ira was a gentle giant with an infectious smile and hearty laugh; known for always being punctual. You never knew in what capacity you would see Ira. Ira may have been wearing a suit and tie to handle church or community business or in a t-shirt and work pants riding down Star Rd on his John Deer tractor; one thing was for certain he was on his way to help someone in our community. Ira had such a huge caring and giving heart, but you'd better believe, Ira didn't take no mess! Ira was straight up, honest and fair to all that he met. Ira's passions in life included fishing, playing cards, reading the Bible, playing Softball, watching sports-especially College football, mentoring through ministry for all ages and singing - and you better have been on key. No matter what the task, Ira was very meticulous and methodical in his approach. No mission was too big or too small if it was helping to improve our community. Just as he stood a strong pillar in Rankin County, he mirrored the same high expectations for his children; hard working, taking pride in their work, striving for excellence, exceeding expectations and being a person of your word. His motto was Proverbs 22:1 A good name is more desirable than great riches; to be esteemed is better than silver or gold. Or as Ira would say "A good name is worth more than silver or gold." He graduated from Holy Ghost Catholic school in Jackson, MS in 1965, followed by Alcorn State University in Lorman, MS where he graduated Magna Cum Laude with a Bachelors in Business Administration in 1969. Ira immediately entered his professional ca reer at Hinds County Project Head Start followed by Community Service Association, then Delphi Packard Electric until he retired. Outside of his corporate career, Ira was an entrepreneur who independently farmed and owned and operated Singleton Logging, Inc. Ira was well-rounded and was involved in many organizations which included: Alpha Phi Alpha Fraternity Inc., Urban League, Communities Working to Unite Youth (CWUY) - past President and Founder, Hinds Community College Advisory Board, Puckett Athletic Association, Puckett Attendance Center, Friends of Children of Mississippi, Rankin County Development Corporation, Keys To Life - Mentor, Rankin County United for Change (RCUC), Concerned Citizens of Rankin County, Rankin County Farmers Co-op, Lincoln County Mass Choir, Multipurpose Association (Component of Community Service Association) - Director, Family Health Care Clinic Board of Directors and Rankin County School Board. Ira just recently married his high school sweetheart, Gloria Johnson Matory Singleton. Ira was previously married to Edna Jordan Singleton Rhodes, Betty Johnson Hart Singleton, Marilyn Flowers Singleton, Regina Hughes Singleton and Glendora Procter Sin gleton. To these unions, Ira was the father to 12 children by way of birth and blended families. Although Ira had plenty of children of his own, he always extended his strong yet loving arms around countless other children throughout his life. Ira was a firm disci plinarian who believed in not spoiling a child but rather teaching them important life lessons. Ira was preceded in death by his parents, Ira Lee and Havron Taylor-Singleton, a loving wife, Betty Johnson Hart Singleton, and a great-grandson, Connor "Tonka" Demarcus Evans. Ira leaves to cherish his fond memories a loving wife, Mrs. Gloria Johnson Matory Singleton of Clinton, MS, Seven daughters: Yolanda Singleton of Florence, MS, Zenobia O. Hart-Richardson of Crestview, FL, LaTesa (Carlos) Hughes Bowen of Ashbury, VA, Myra Singleton of Snellville, GA, Rita Sanders of Byram, MS, Fatina (Reginald) Cutrer of Byram, MS, Carmelita "Nikki" Proctor of Brandon, MS. Six sons: Eric Singleton of Jackson, MS, Kevin Matory of Jackson, MS, Andre (Laramie) Proctor of Woodbridge, VA, Ira Singleton, III of Lilburn, GA, Kobie Singleton of Florence, MS, 31 grandchildren, 11 great-grandchildren, one sister: Sarah Holsey of Nashville, TN. He also leaves a host of aunts, nieces, nephews, great nieces, great nephews and cousins. Ira lived his life so that people could see the God in him as he was serious about his salvation. Ira would always say, "Hell is too hot, and eternity is too long not be saved". On Saturday, June 12, 2021, Ira started his day fulfilling his passion and purpose by helping someone else to cut a tree down. While performing this task, Ira was fatally injured and entered into eternal life. "Our death is not the end if we can live on in our children and the younger generation. For they are us; our bodies are only wilted leaves on the tree of life." - Albert Einstein

The family of Mr. Ira Lee Singleton Jr. created this Life Tributes page to make it easy to share your memories.

Send flowers to the Singleton family.