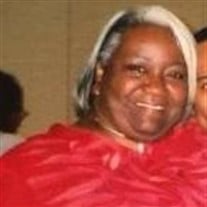 Jacqueline Wade Thomas was born July 1, 1950 to the late Elinor Ruth Wade and the late Louis Wade Sr. She was a graduate of Oak Park High School “Class of 68." She attended Jackson State University where she played clarinet in the Marching 100, which is now known as the "Sonic Boom of the South." She graduated from JSU in 1972 with a degree in Library Science and also attended the University of Southern Mississippi. She was married to the late Gordon Charles Thomas and from this union, two daughters were born; Candace and Tiffani Thomas. Jackie joined St. Elmo Missionary Baptist Church at an early age where she served as the church's secretary for many years and also sang in the choir. She was a mem ber of Delta Sigma Theta Sorority, Inc. She worked for over 20 years at the Laurel Jones County Library where she was commonly called the “Library Lady" all over the community. She entered the Laurel City School System working at Oak Park Elementary, Stanton Elementary and later retiring from Heidelberg High School, where she was a Media Specialist in the early 2000's. There was nothing Jackie liked better than an interesting conversation with a good friend or a new friend. She could have an engaging conversation with anyone. She was a lover of life and a wonderful mother. She loved her family. She had a way about her that only she could own. Spending time with her cousins that were more like her sisters and brothers was her favorite past time. Jackie loved her alma mater, Jackson State University, where she spent most of her Saturdays cheering on her team, no matter the outcome. She touched so many lives big and small, near and afar. Her indomitable spirit encouraged her family and friends to persist in the face of many struggles. Jacqueline W. Thomas will be missed but not forgotten. She is proceded in death by her mother Elinor Ruth Wade, her father Louis Wade Sr. and brothers Tony Wade and Reginald Roberts. She is survived by two daughters, Candace (Jamaal) and Tiffani Thomas and one beloved grandson, Chance Michael Adams, all of Brandon, MS; three brothers, Louis Wade Jr., David Lee Wade (Belinda), both of Laurel, MS and Terry Wade of Taylorsville, MS; two sisters, Patricia Langston (Melvin) of Atlanta, GA, and Bar bara Wade of Rio Rancho, NM. She leaves behind many aunts, uncles, nephews, nieces, and cousins.

Jacqueline Wade Thomas was born July 1, 1950 to the late Elinor Ruth Wade and the late Louis Wade Sr. She was a graduate of Oak Park High School &#8220;Class of 68." She attended Jackson State University where she played clarinet in the Marching... View Obituary & Service Information

The family of Ms. Jacqueline W. Thomas created this Life Tributes page to make it easy to share your memories.

Send flowers to the Thomas family.