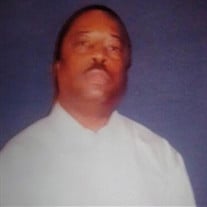 James E. Bradford was born on December 19, 1959, in Jackson, Mississippi, to Rosie M. Harrington. At an early age he was adopted by his beloved grandparents James and Ruby Bradford. On January 20, 2022, Mr. Bradford departed this life at Yazoo... View Obituary & Service Information

The family of Mr. James Earl Bradford created this Life Tributes page to make it easy to share your memories.

Send flowers to the Bradford family.