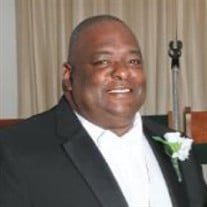 James “Pete” Christopher McAllister born on January 29, 1962 in Brandon, MS. The oldest child of Joel and Daisey McAllister Taylor. His parents and brothers Dexter and Bruce proceeded him in death. He was raised in the Haynes Chapel Community by his grandparents Dixie (Bud) and Ruthie Hobbs McAllister (Big Daddy and Big Mama) along with his aunts and uncles. Being the youngest he was given the nickname “BoPete” later the name shorten to “Pete”. A graduate of Pelahatchie High School, where he was an outstanding athlete and Utica Junior College with and Associate of Science Degree, where he was also an employee. Being a provider to his family was an important part of Pete's character. Pete's entrepreneur spirit came from his Big Daddy. He raised crops, drove trucks, and was dedicated cattleman. Pete also owner a construction business. Addi tional he was a certified welder. Later he became an employee for Mississippi Baking Company in the transportation department until his death. Pete dedicated his life to God at Haynes Chapel Church and later moved his membership to Rawls Chapel Church where he was baptized in 1979. He served as a faithful member and a Deacon until his death. He was always a de light at Bible class on Wednesday nights and Sunday School with his wit. Pete's loves for family and strong male presence earned him the title of Uncle Pete to his younger cousins. Uncle Pete was a constant figure of support and role model. Uncle Pete taught the younger ones to drive trucks, tractors and 4-wheelers, really he was teaching us to feeds the cows. He was known to at tend little league, junior high, high school, college, and NFL games, children parties, babies' births any gathering. Pete joined Monica Thompson in holy matrimony in 1989. He leaves cherish | memories to his loving devoted wife of 30 years Monica McAllister, daughter Kanesha Collier (Devell/Donta), son, James Christopher McAllister, Jr., grand son Devell Collier, Jr., sisters Valerie and Sherry Taylor of Sandhill. A host of family members and friends.

James &#8220;Pete&#8221; Christopher McAllister born on January 29, 1962 in Brandon, MS. The oldest child of Joel and Daisey McAllister Taylor. His parents and brothers Dexter and Bruce proceeded him in death. He was raised in the Haynes Chapel... View Obituary & Service Information

The family of Mr. James (Pete) McAllister created this Life Tributes page to make it easy to share your memories.

Send flowers to the McAllister family.