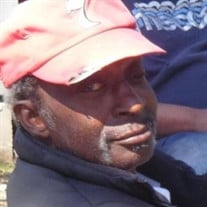 "And they were astonished out of measure, saying among themselves, Who then can be saved?" And Jesus looking upon them saith, with men it is impossible, but not with God: for with God all things are possible." Mark 10:26-27 James Earl Walton was born May 27, 1952 to the late Senior Deacon Will Henry and late Mother Mary Jean Burton-Walton in Brandon, Mississippi. He departed this life at St. Dominic's hospital in Jackson, Mississippi. He was the 3rd of eleven siblings. James was preceded in death by his parents, Senior Deacon Will Henry and Mother Mary Jean Walton, three brothers, Willie, Earnest and Edward Walton, one god brother, David "Wavy Dave" Weathers, and one sister, Linda Jean Walton-Jones. James united with Pilgrim Rest Missionary Baptist Church of Brandon, Mississippi at an early age and later moved to Chicago, Illinois where he worked for the City of Chicago. He worked most of his life until his health failed him. Known to most as "Earl" and to some as "7", James attended Carter High School in Brandon, MS. During his lifetime, he was known for caring for the elderly. James was the comedian of the family. There was never a dull moment when he was around. He enjoyed fishing and playing sports. James returned to Mississippi and reunited with his childhood church. Shortly after, he was involved in several accidents which caused him to live in an assisted living home (Harmony Court) in Jackson, Mississippi, where members of Pilgrim Rest visited and ministered unto him. James was often told that he had nine lives because of the many incidents he had encountered; yet survived. James leaves to cherish his memories, one godson, Kirk Myers, four sisters: Annie Collier, Verdean Potter, and Deborah Lindsey, all of Brandon, MS, and Bonnie (Claude) Norris of Jackson, MS; two brothers: David Walton of Huntsville, AL and Eddie Walton of Brandon, MS; two godbrothers, Otis Brown of Monroe, LA and Ricardo Brown of Atlanta, GA; three nieces as siblings: Latonya (Ricardo) Gray of Houston, TX, lesha Walton of Rockford, IL, and Krystal Walton of Jackson, MS; two nephews as brothers: Vincent (Jakerra) Walton of Morton, MS and Willie (Charlie) Walton of Rockford, IL, a special niece: Carolyn Benton of Moscow, TN; two aunts: Mother Gladys Macklin and Mother Leola Lovett of Jackson, MS; two uncles: Elbert Watts of Brandon, MS and Deacon Isaiah Washington of Pearl, MS; one step-uncle: Deacon Joseph (Annie) Palmer; two step aunts: Annie Dora (Floyd) Morrow of Jackson, MS and Norma Jean Cowan of Florence, MS; a very special cousin (Aunt) Mother Mary (Exodus) McCornell of Brandon, MS ;and a host of nieces, nephews, cousins, relatives, and friends.

"And they were astonished out of measure, saying among themselves, Who then can be saved?" And Jesus looking upon them saith, with men it is impossible, but not with God: for with God all things are possible." Mark 10:26-27 James Earl Walton... View Obituary & Service Information

The family of Mr. James Earl Walton created this Life Tributes page to make it easy to share your memories.

&quot;And they were astonished out of measure, saying among themselves,...

Send flowers to the Walton family.