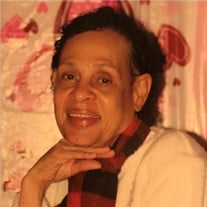 Jean Henry, 71, of Florence, Mississippi, passed away peacefully at home on April 25, 2020, comforted by her husband and daughter. Jean remained strong in faith and focused on the Lord throughout her lengthy battle with pancreatic cancer. Jean Elaine Condell was born on the island of Jamaica in the parish of Westmoreland on October 31, 1948. She was raised by her maternal grandmother, Mahalia Allen, who played a prominent role during Jean's formative years. Jean attended Montego Bay High School and graduated in 1967. Two years later, she went to England to study nursing. While there, Jean met and married her husband, Conclive Henry, who was enlisted in the U.S. Air Force and hailed from the state of Michigan. Later, the couple moved to the United States where their daughter Avril was born. After leaving the Air Force, Jean's husband accepted a position at Xerox Corporation and the family moved to Jackson, Mississippi. Jean worked as a nurse at University of Mississippi Medical Center and retired from there in 2004 after providing compassionate care to her patients for twenty-six years. When life brought its challenges, Jean drew tremendous strength from her Christian faith. At age fourteen she was introduced to the Advent message and was baptized, along with her grandmother, at their local church in Jamaica. In 2012, after a lengthy absence from church, Jean began attending College Drive Seventh Day Adventist Church in Pearl, MS and she was re baptized there on September 21, 2019. Jean was an avid gardener who held a deep appreciation for the beauty of flowers and whenever she was out and about, Jean took notice of the plant life around her. Her face would light up as she enthusiastically shared with others details about the various plants and blooms that crossed their path. At home, she meticulously tended her flower gardens and they thrived. Jean had a cheerful disposition and she readily extended kindness to others. She built many close friendships over the years and joyfully embraced her church family. Even though relatives and friends lived far and wide, she always held them near to her heart. COCOO Jean was predeceased by her mother, Dolsie Campbell, and father, Raoul Emil Condell. She leaves behind her devoted husband Conclive of Florence, MS; her only child, daughter Avril Henry of Braintree, MA; brother Samuel (Elizabeth) Riley of Woodbridge, NJ; sisters Faith (Carl Sr.) Sterling of Montego Bay, JA and Donette (Hendley) Walker of Stewartsville, NJ; sisters-in law Lenore (Vincent) Taylor of Benton Harbor, MI and Sedalia Williams of Grand Rapids, MI. Jean also leaves behind several nieces and nephews, her cherished Butler-McNeal cousins of Chicago, IL, and 'adopted siblings' Rosie Cook, Olga White, Rita Peden, Arthur and Mary Meredith, Lauren Pitts, Elvie Guthrie-Lewis and Jean Mitchell.

Jean Henry, 71, of Florence, Mississippi, passed away peacefully at home on April 25, 2020, comforted by her husband and daughter. Jean remained strong in faith and focused on the Lord throughout her lengthy battle with pancreatic cancer. Jean... View Obituary & Service Information

The family of Mrs. Jean Elaine Henry created this Life Tributes page to make it easy to share your memories.

Send flowers to the Henry family.