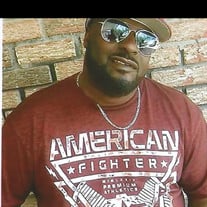 Jeffery Donell Walters was born November 28th, 1972 to Annie Jean Walters and Roy Lee Makee in Jackson, MS. Jeffery grew up in Brandon, MS and he attended Pearl High School where he was an all around athlete. He was an exceptional running back and held the longest touch down run from one end zone to the next. He was the #1 offensive player for 8 weeks straight in 1991. He also held the record for the longest long jump for over 29 feet. He ran a leg in the 440 relay and had one of the fastest times in the state and went on to help Pearl win state. He played basketball, football and ran track. He also played softball for a local team in the community. He graduated from Pearl High School in 1992 and went on to attend Hinds Community College to play football and ran track as well. His passion for sports continued as he was in attendance at all Pearl High School basketball and football games to show his support to young athletes. Jeffery was the owner of Lawn Life Landscape where he provided lawn care services to many residential and business customers throughout the community for more than 20 years. He also employed many young men in the community and taught them skills such as trimming, lawn care, maintenance, and operation of lawn care tools. He was also a barber for more than 20 years. Jeffrey was a member of Sandhill Missionary Baptist Church in Brandon, MS all his life where he sang in the choir. Jeffrey loved his church and his Pastor, Larry J. Holmes. He was a loving and caring father who enjoyed cookouts with family and friends. In his spare time, he loved to fish and hunt. Jeffery's faith and hard work inspired so many people. He was a beautiful man who was loved by many and touched countless of lives on this earth. He will forever be missed. ww Jeffrey is survived by his mother, Annie Jean Walters, his brothers, Douglas Howard Walters, Earnest Howard Walters, Roy Lee Makee Jr, and his sisters, Leegenia Wilson and Vanessa Hangley. His wife, Shonula D. Walters, his special friend, Jennifer McCaleb, his children, daughters, Kiwanza Ainsworth, Audresha Ragsdale, Ciara Taylor, Shakeria Trigg and Laporsha Holifield. His sons, Andre Ainsworth, and Zykiah Walters and a host of grandchildren. Jeffery is preceded in death by his father Roy Lee Makee Sr. and his sister Cynthia Denise Walters.

Jeffery Donell Walters was born November 28th, 1972 to Annie Jean Walters and Roy Lee Makee in Jackson, MS. Jeffery grew up in Brandon, MS and he attended Pearl High School where he was an all around athlete. He was an exceptional running back... View Obituary & Service Information

The family of Mr. Jeffery Donell Walters created this Life Tributes page to make it easy to share your memories.

Send flowers to the Walters family.