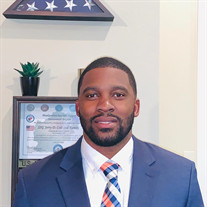 Jerry Darnell Cole, Jr. was an amazing father, protective brother, loving son, brave soldier, hustling entrepreneur and ever-present cousin. He was born in Clarksdale, Mississippi, on August 12, 1983, to Jerry Cole Sr. and Donna Leonard Cole. To say he was a beautiful bundle of joy is perhaps an understatement. Though he was a bit shy, this handsome boy was confident and had plenty of personality. Jerry confessed his belief in Christ at an early age. He loved his church and was active in the children's department. After moving to Pearl, Mississippi, Jerry began to develop as a superior athlete. Some would say it was a genetic gift passed down by his father, Jerry Sr. God later blessed with a bonus father, Raphael McNair, and two brothers who looked up to him. Jerry was protective of all those around him, even the cousins he bonded with during extended visits to Clarksdale. He was a founding member of his family's "white tee gang", which got it's name from sleepovers. A product of the Rankin County Public School System, Jerry attended Pearl High School. There he was an athletic phenom. He had agility and remarkable natural talent. After graduation, Jerry enlisted in the United States Army National Guard. There he served 13 years and achieved the rank of Sergeant First Class. Jerry completed three tours to Sharana, Afghanistan Bagram and Afghanistan Kabul. During this time in the military, he received many awards, medals, recognition and commendations. Jerry spent a few years employed at the Mississippi Department of Corrections. He later moved to Louisiana, where he worked as an electrical lineman at Entergy for six years. In 2018, Jerry united in holy matrimony to Sheena Taylor. The pair started a new family and a new business as owners of J and S United, a Louisiana-based commercial cleaning service. Sheena counted herself blessed to have built a life with her enterprising, Godfearing and completely selfless "Superman". Jerry wanted to become the greatest version of himself so that he could be the best for those around him. He enjoyed time with his family - especially when they gathered around the dinner table. Forever an athlete, he delighted in watching and attending sporting events. He also took pleasure in gaming, outdoor activities, dates with his children and travel. Whether it was his humor or just the wonder ful smile he flashed, Jerry was magnetic. He made lasting connections with people and they valued his friendship. His personality made him well-suited for the varying cultures he encountered during his military tours. He un derstood the delicate nature of our involvement in foreign affairs. He was actively engaged in the human rights and social justice activities affecting Black people in America. He loved our country and wanted the American Dream for everoyone. He was a soldier and a citizen, but the title he loved most was Daddy. He appreciated the blessing and responsibility of fatherhood. In his children, he saw the best part of himself. He was always present whether it meant taking a six-hour weekday trip for a recital or to deliver a little discipline in the way only a loving daddy can do. As a product of a family that loved celebrating life, he went above and beyond to make his children, parents and wife feel special on thier birthdays. Jerry had a beautiful heart. His family, his friends, his community and the world were better because he was in it. However, the man for whom many cared transitioned on May 4, 2021, in Houston, TX. Jerry was proceeded in death by his baby brother, Bradford Cole. He will forever be missed by his beautiful wife, Sheena Cole of Geismar, LA, his chil dren Jerrica Cole, Ashlynn Taylor, Zariah Daniels, Jordan Evans, Bailee Cole, Joylyy Durr, Jaelyn Harkless, Journee Cole, his par ents Donna McNair, Raphael McNair and Jerry (Fonda) Cole; his mother-in-law; Renee Dr. Willie) Taylor-Smith, his siblings-in-law, ( Tony Harper, Kenisha (Sylvester) Joiner and Anjelica Spann, Sasha Thomas, and a host of other relatives, close friends, Entergy family, and service members who loved him dearly.

The family of Mr. Jerry Darnell Cole Jr. created this Life Tributes page to make it easy to share your memories.

Send flowers to the Cole family.