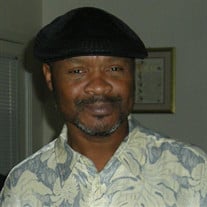 Brother Jerry Johnson was born July 22, 1960, in Rankin County to Jessie B. Johnson, Sr. and Marie Mangum Johnson, both of whom preceded him in death. He finished his earthly journey on February 12, 2020. Also preceding him in death were two... View Obituary & Service Information

The family of Mr. Jerry Johnson created this Life Tributes page to make it easy to share your memories.