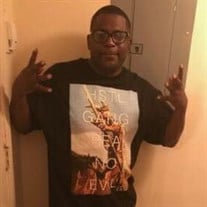 Jessie Antonio Bullock Jr. was born January 14, 1978 to Ella Mae and Jessie Bullock Sr. in Jackson, Ms. On Sunday, December 12, 2021, God called him home to his enternal resting place. At an early age he joined Ray's Chapel Baptist Church in Jackson Ms, where he was baptized. He then moved his membership to Gateway of Heaven located in Pelahatchie, Ms. under the leadership of Pastor Daisy Smith. Jessie attended Rowan Middle School and Murrah High School, where he enjoyed playing basketball, and later on in life he became an entrepreneur. Jessie Antonio Bullock Jr. was known by family and friends as "Booman". He had such a warming beautiful smile that would light up the room. Booman was a loving family man to his mom, dad, sister, children, and friends. He would do for others, and was always lending a helping hand, and would even offer you the shirt of his back. The majority of his time was spent with his parents, and children, while making sure their needs were met. We take comfort in knowing that he is now at peace with God. He is proceeded in death by his loving son Jameal "Meal" Smith, and his brother De'Arquis "Boosie" Williams. Jessie leaves behind a lifetime of cherished memories. Jessie is survived by his mother and father, Ella Mae and Jessie Bullock Sr. of Jackson, Ms. One sister, Chelsey Bullock of Jackson, Ms. Eleven children, Jasmin, Jordin, Jamiya, Jaheim, Jaliya, Jamyra, Jazayah, Armoni, Jeremiah, Jhaquez and Jhaqueria, all of Jackson Ms. Three nephews, Aiden "Roundhead", Mari, and Aaden. Four aunts, three, uncles and a host of cousins and friends.

The family of Mr. Jessie Antonio Bullock Jr. created this Life Tributes page to make it easy to share your memories.

Send flowers to the Bullock family.