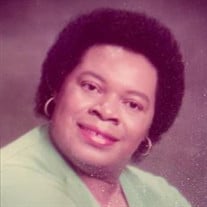 On September 13, 2020, Sister Jessie Ruth Williams Donelson fulfilled the schedule that God had planned for her. God "Well done my godson and faithful servant" and he called her home. The sweet spirit of our dear sister, Jessie, went to join the Savior, in that home not built by sword hands, but whose maker and builder is God. She reunited with her parents, sister, two nieces, and the rest of her heavenly family. Sister Jessie was the second born to the late Robert and Ella Geneva Williams in Star, MS on 12. One sister, Alee "Pig" Ball, preceded her in death. Born to Christian parents, she accepted Christ at an early age. Sister Donelson was baptized by Reverend J. E. Marsh and joined Enoch Grove Church where she worshiped her entire life. In her younger years she served as an usher. Sister Donelson started her education at New Hope School and graduated from McLaurin High School in Florence, MS, in 1961. She decided to move to Jackson, MS, with her big sister, Pig. While in working at Crescent Laundry (6 years) she met the love of her life, Timothy. They were united in Holy Matrimony November 12th, 1966. To this union a devoted daughter, Jessica Timette Donelson was born. Sister Donelson was a loving and devoted wife and mother. She found in pleasure in providing for her family and helping others. She worked 41 years at G&O/ Transport/ Modine Manufacturing Company. Where she made life long friendship. She also served as her Union Secretary for the entire time she worked at G&O/Transport/ Modine Manufacturing Company. She leaves to cherish her precious memories: a loving husband, Timothy; one caring and compassionate daughter, Jessica Timette Donelson, Jackson, MS; two nieces preceded her in death, Joyce and Evelyn Ball; three great nieces, Keisha Ball, Ebone' Ball (Candace), and Selledia Aleesha Ball; one nephew, Luther Napoleon York. She also leaves many nieces, nephews, cousins, and friends.

On September 13, 2020, Sister Jessie Ruth Williams Donelson fulfilled the schedule that God had planned for her. God "Well done my godson and faithful servant" and he called her home. The sweet spirit of our dear sister, Jessie, went to join... View Obituary & Service Information

The family of Ms. Jessie Ruth Donelson created this Life Tributes page to make it easy to share your memories.

Send flowers to the Donelson family.