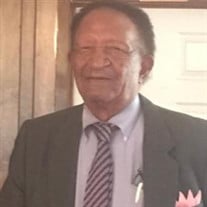 Joel Taylor, was born on December 25, 1934 to the late Harvey and Margetta Taylor in rural Rankin County. Several of his sibling have made their transition: Mary Johnson, Laura Irvin, John Freeman Archie, Bobby Taylor, Harvey Taylor and Doreada Lyles. Also proceeding him in death, his wife of 47 years, Daisey Lee McAllister, sons: Dexter Taylor and Bruce McAllister. Joel started his journey with the Lord when he gave his life to Christ and was baptized at the age of 9 in a pond behind the original Mt. Pisgah Church, where his father was one of the founding Deacons. Joel served Mt. Pisgah Church until his death, holding the positions of Church Treasurer and Chairman of the Deacon Board. He was one of the leading focuses to ensure the current church was built and completed, because he loved his church and his community. Joel's eight grade education in a one room school-house, provided him well. He worked at MPI in Jackson and the Tent Company in Canton. He settled for a position at the Ross Barnett Reservoir, where he retired after 38 years of service in 1998 in the position of Supervisor. Even though he was a quiet man, he fought for his crew of color to be equally paid and given company vehicles to drive home while on call. Joel's leadership and dedication led him to the rank of the 32nd degree Mason in the Sandhill Mason Lodge. Joel and Daisey were advocates, serving in the Civil Rights Movement in Rankin County, members of the Industrial Workers of World Union, were they marched in Washington D.C. for safe working conditions and fair wages. They worked with the Meals on Wheels Organization to provide meals to the community. They were parents to countless foster children. He leaves to cherish his memory: children: James "Pete” (Monica) McAllister, Valerie Taylor, Sherry Taylor all of Rankin County; grandchildren: Gary, Kanesha, Fatythe, Jo'Lissa, Coby James "Chris” and Sandrell; great grandchildren: Harmoney, Raine, Ava Jo'el, Aydien and Allen Troy; sibling: Afteerteen Taylor (Henry deceased) Robert “RC” Taylor (Betty, deceased) of Chicago, Illinois.

The family of Mr. Joel Taylor created this Life Tributes page to make it easy to share your memories.