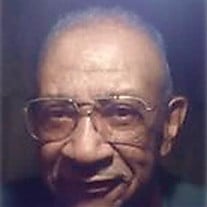 Johnnie Lee Mangum, the son of the late Emanuel Mangum and Webbie Jones Mangum was born on May 4, 1939 in Florence, Mississippi. He was 82 years of age at the time of his passing when he departed this world Friday, May 21, 2021 for a better place on high. He completed his education at McLaurin High School and graduated May 25, 1961 with a diploma. Johnnie professed his faith in Jesus Christ at an early age and joined the Good Hope Missionary Baptist Church where he was a dedicated member. At Good Hope, he served faithfully as a member of the Deacon Board. His selfless spirit and kind heart led so many to love and respect him. He was committed to his Christian life just as the fond affection he held for his Chevrolet trucks over the years. His influence will forever remain in the lives of all who knew him. Johnnie was united in holy matrimony to Ruth Harris and this union was blessed with eight children. His second marriage was to Willie Ruth Jaynes and through this union, five stepchildren were gained. Willie Ruth preceded him in death, December 2012; two brothers, Zebedee Willis, August 2005 and Genias Willis, October 1998 and a son, Shelton L. Mangum, June 1982. Johnnie is survived by his children (spouses), Sharron Karidis (Aristidis) of London, England; Vernon Mangum (Sugar) of Biloxi, MS; Vincent Mangum (Sharon), Errythah Adofo (Taharqa), Joni Moore and Eric Mangum of Atlanta, GA, and Tammy Ward (Karnesto) of Brandon, MS; one brother, Eddie Lee Mangum (Ethel) of Florence, MS; grandchildren, Centél Mangum, Jayden Moore, Cristofer Ward, Ethan Mangum, Dé Aundre Ward, Jared Moore, and Dakarai Adofo; a great grandson, Sunday Morning Mangum; a niece, Kathy Mangum and a nephew, Lee Marvin Mangum; grand-nieces and nephews, Tinesha Mangum, Joi Jones, and Lee Marvin Mangum, Jr.; stepchildren, Carl Gray-deceased (Sheila), Michael Gray (Daisy), Sylvia Gray, Eric Gray (KaTina), and Stephanie Gray; step-grandchildren, Carlton Gray-deceased, Ashley Gray, Jarvis Gray, Daisha Gray, Marcus Gray, Mercedes Gray, Myles Gray, Zola Gray, Harper Gray, and Kinndrick Hollins, and a host of devoted cousins, friends, and church family. A sincere thanks is extended to everyone for their condolences and prayers.

Johnnie Lee Mangum, the son of the late Emanuel Mangum and Webbie Jones Mangum was born on May 4, 1939 in Florence, Mississippi. He was 82 years of age at the time of his passing when he departed this world Friday, May 21, 2021 for a better... View Obituary & Service Information

The family of Mr. Johnnie Lee Mangum created this Life Tributes page to make it easy to share your memories.

Johnnie Lee Mangum, the son of the late Emanuel Mangum and Webbie...

Send flowers to the Mangum family.